Humans are not the only species on earth that develop cancer; our beloved pets can also succumb to the ‘Big C’ too.

Humans are not the only species on earth that develop cancer; our beloved pets can also succumb to the ‘Big C’ too. While more treatment options are sorely needed for human forms of the disease, the options for animal cancers are severely limited. Often, euthanasia is the only option offered (or even available) to relieve the suffering of our four-legged friends. However, the Bauer Research Foundation is on track to change this situation, and in the process bring a new cancer drug not just to the veterinary clinic, but hopefully to oncology units the world over.

In general, all cancers are highly dependent on a molecule called cobalamin (Cbl) for their survival. In fact all cells are. Cbl is another name for vitamin B12, which is an essential B vitamin for DNA synthesis, and vital to cell division, proliferation and stability. Cancer cells, however, are known to ramp up their Cbl dependency, which goes hand-in-hand with the territory of frenzied cell division.

The Bauer Research Foundation decided to study the expression of two proteins required for Cbl transport and uptake (as well as the proliferation marker ki-67) in naturally occurring cancers. But instead of using human tumor tissue samples (which are fraught with regulations) Project Leader and Foundation President Dr. Annette M. Sysel decided to look at naturally occurring canine and feline cancers. In addition to the ease of obtaining tumor samples from pet patients, Sysel, an expert in veterinary medicine and surgery, explained further: “As our animal companions share our environment (thus being exposed to a lot of the same carcinogens as us) the clinical relevance of studying their cancers is clear. Plus, as the Cbl transport and uptake proteins share so much similarity across species, the results from this study are very translatable to human cancer patients.”

In support of cancer’s Cbl ‘addiction’ Sysel found that the expression of both the Cbl transport protein and uptake receptor (as well as ki-67) increased dramatically in the 30 canine and 36 feline samples (from various cancers) included in the study, compared to the adjacent, normal tissues in the same patients. As part of this investigation, samples were stained immunohistochemically with Proteintech antibodies recognizing the transcobalamin transport protein TCII and cell surface receptor TCII-R*. In performing this study the team has identified new biomarkers with diagnosis, prognosis and treatment assessment potential. Yet, the Foundation hasn’t stopped at measuring these proteins; it has an ingenious, Cbl-based tactic up its sleeve to treat cancer…and it seems to be working beyond expectation in Man’s Best Friend.

Cbl and cancer’s obligate need for it has been known about for some time (since the late 1960s at least) and ever since then, researchers have looked at ways to exploit this relationship. Could Cbl be modified to carry chemotherapeutic molecules into Cbl-hungry tumor cells – a kind of micronutrient ‘Trojan Horse’ so to speak?

Many different permutations of Cbl-anti-tumor drug conjugates have been tried, but have been found wanting. Not because these drugs were not potent enough in each case, but because they fail to gain cellular entry in the first place: the size and configurations of these modified molecules no longer resemble Cbl – cancer is not fooled so easily. But Dr. Joseph Bauer, eponymous founder of the Bauer Research Foundation, had another approach in mind.

Nitric oxide, or NO to give it its chemical formula, is an important physiological signaling molecule produced in mammals; it is also small and simple in structure. It is perhaps most well-known for its roles in cardioprotection and as a vasodilator (it relaxes the tone of blood vessels, increasing blood flow).  However, it has a double-edged sword-nature due to its unstable reactivity (it has an unpaired electron on its nitrogen atom). At uncontrolled doses it has the potential to cause considerable damage to cells and has been shown to inhibit cell proliferation and DNA synthesis. Under certain physiological conditions it brings about apoptosis by inducing caspase activity. Because of these properties its capacity as a tumoricide is currently under investigation.

Dr. Bauer was convinced NO was an ideal molecule to load onto a Cbl ‘Trojan Horse’.  His PhD had focused on synthesizing NO-donating compounds and he was fascinated with the idea of NO as a cancer therapeutic… “NO was fascinating to me as a possible anti-cancer agent as several studies had shown that the immune system, in particular macrophages, is able to produce NO specifically to target tumors – a reserve of foot soldiers sent in to kill tumors.” Explains Dr. Bauer, “As tumors were known to utilize vitamin B12, my goal was to sneak NO into the cell using vitamin B12 and thus kill the cancer from within.”

This idea led to the development of the Cbl analogue nitrosylcobalamin (NO-Cbl) in 1997. After successes in testing NO-Cbl both as a sole agent and in combination with other therapies in lab-based models, it was submitted to a human tumor 60-cell line-screen at the NCI Developmental Therapeutics Program. The Program testing was a success, a good indication of the drug’s clinical efficacy, and Bauer and his colleagues became confident NO-Cbl treatment would work in clinical patients; they just needed the opportunity… 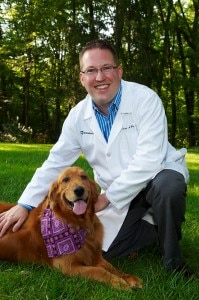 Dr. Joseph A. Bauer with Buddy, a patient successfully treated with NO-Cbl. (With permission).

In the early 2000s, while working at the Taussig Cancer Center of the Cleveland Clinic, Dr. Bauer obtained FDA (US Food and Drug Administration) permission to treat ‘a small number of dogs’ with NO-Cbl, to evaluate its safety and efficacy. In 2004, he received a phone call one Friday from the heartbroken owners of Oscar, a ten-year-old Bichon Frise. Oscar was suffering from anal gland adenocarcinoma, a particularly malignant type of cancer that in Oscar’s case had spread to a local lymph node. They had been told he only had three months left to live. But – having read about Dr. Bauer’s research – they decided to reach out to him, even as they went through the motions of preparing to put a very sick Oscar to sleep the next day. Dr. Bauer’s reply gave them one last shred of hope; he quickly accepted Oscar as his first trial patient.

Oscar’s veterinarian agreed to trial the drug and NO-Cbl was shipped out immediately. Oscar was quickly put on a NO-Cbl treatment regime and within weeks of his first treatment, his cancer began to regress dramatically; he was up walking and playing again after two weeks. With continued NO-Cbl therapy, Oscar’s tumor and affected lymph node completely and permanently regressed. 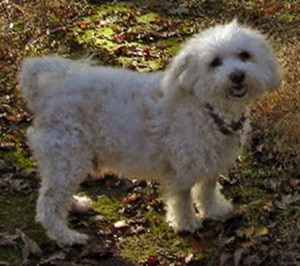 Oscar the Bichon Frise who was the first patient to be treated with NO-Cbl for an aggressive cancer in 2004. The drug was an astounding success. (With permission.)

Perhaps what was most impressive about Oscar’s case was not just the dramatic regression of an aggressive, late-stage cancer, but also the low toxicity of the drug. Oscar never showed signs of any side effects commonly seen with other cancer drugs, despite remaining on NO-Cbl therapy daily for three years (he stayed on it so long simply because his owner was afraid to discontinue the treatment**).

Dr. Sysel explains why Oscar likely did not experience any side-effects: “The up-regulation of the Cbl transport protein and especially the Cbl cell surface receptor by tumor tissues allows preferential uptake of NO-Cbl by the these tissues, leaving healthy tissues unaffected. To add further to its safety profile, the dissociation of NO from Cbl occurs only in the acidic environment inside cells and not in the pH-neutral bloodstream, so clinical effects of NO release are not seen.” But it was not just Oscar that displayed this phenomenal lack of side-effects.

A trickle of dogs followed Oscar on a first-come, first-serve basis, and soon Dr. Bauer had accrued ten canine patients to evaluate NO-Cbl’s safety and efficacy against a variety of tumor types. Several more incredible regressions were seen in these additional trial patients, accompanied by absent toxicity. Within six months of NO-Cbl treatment, one Labrador’s spinal tumor, previously been deemed a lost cause by surgeons, had disappeared completely. Another dog, a Giant Schnauzer with an inoperable thyroid carcinoma, had its tumor shrunk by two-thirds after ten weeks of daily treatment with the compound.

It was attention-grabbing progress.

Soon enough the media had heard about Oscar “The Miracle Dog” and his cohort, and began to report on the success of NO-Cbl. Dog owners from around the world began to inundate Dr. Bauer with requests for the drug.

Frustratingly for Bauer and these owners, it was at that point that the FDA determined that their criterion of a ‘small number of dogs’ had been met, and that now NO-Cbl would have to be put through the paces of the formal FDA approval process before it could be used to treat any additional pets.

The next step in the development of NO-Cbl for the treatment of cancer in pets is to begin a formal FDA-approved clinical trial to ensure safety and efficacy in a larger number of patients. The Bauer Research Foundation needs to acquire the funding required to pay for this trial.

“Costs for the trial include veterinary visits, blood work rechecks, imaging rechecks, NO-Cbl production and sterile bottling, clinical trial site coordinators, and a trial supervisor. The Foundation needs donations to accomplish this goal.” Says Dr. Sysel, who joined The Foundation after learning of the initial success of the small scale NO-Cbl trial. Sysel is now a driving force at The Foundation, helping to push further development of the NO-Cbl drug by securing vital funding. On the human side, the Foundation also needs to secure the necessary resources to complete the FDA’s Investigational New Drug (IND) studies. Once that happens, a phase I clinical trial in human patients can begin. Pharmaceutical companies have expressed their interest in moving forward with NO-Cbl, but require either initial clinical trial results in pets or the preliminary Phase I data in human cancer patients before taking it on.

“This drug represents an ideal personalized approach to cancer treatment because of our ability to now measure TCII-R expression (and therefore NO-Cbl uptake potential) in an individual patient’s tumor. Due to its non-toxic and targeted nature, NO-Cbl has the potential to treat a variety of tumors in a variety of cancer patients, including children and both pet and human patients suffering from the toxic effects of other therapies” informs Sysel.

Hopefully, this exceptional veterinarian and her pioneering colleague Dr. Bauer will be able to continue their work by receiving the necessary funds to get the next phase of trials up and running. From Trojan Horse, to man’s best friend, the next chapter of No-Cbl’s story looks set to feature a cancer treatment for all creatures, great and small.

You can also contribute to the success of NO-Cbl by making a donation to The Bauer Research Foundation, a registered 501 (c)3 charity organisation.