The  mitochondrion   is composed of an inner and outer membrane, intermembrane space, cristae, and matrix, and contains its own DNA separated from the nuclear DNA. Knowledge of the subcellular location of a protein may reveal the potential role it plays in a variety of cellular processes. Colocalization with one of the organelle-specific markers listed here can confirm the subcellular location of a mitochondrial protein of interest. 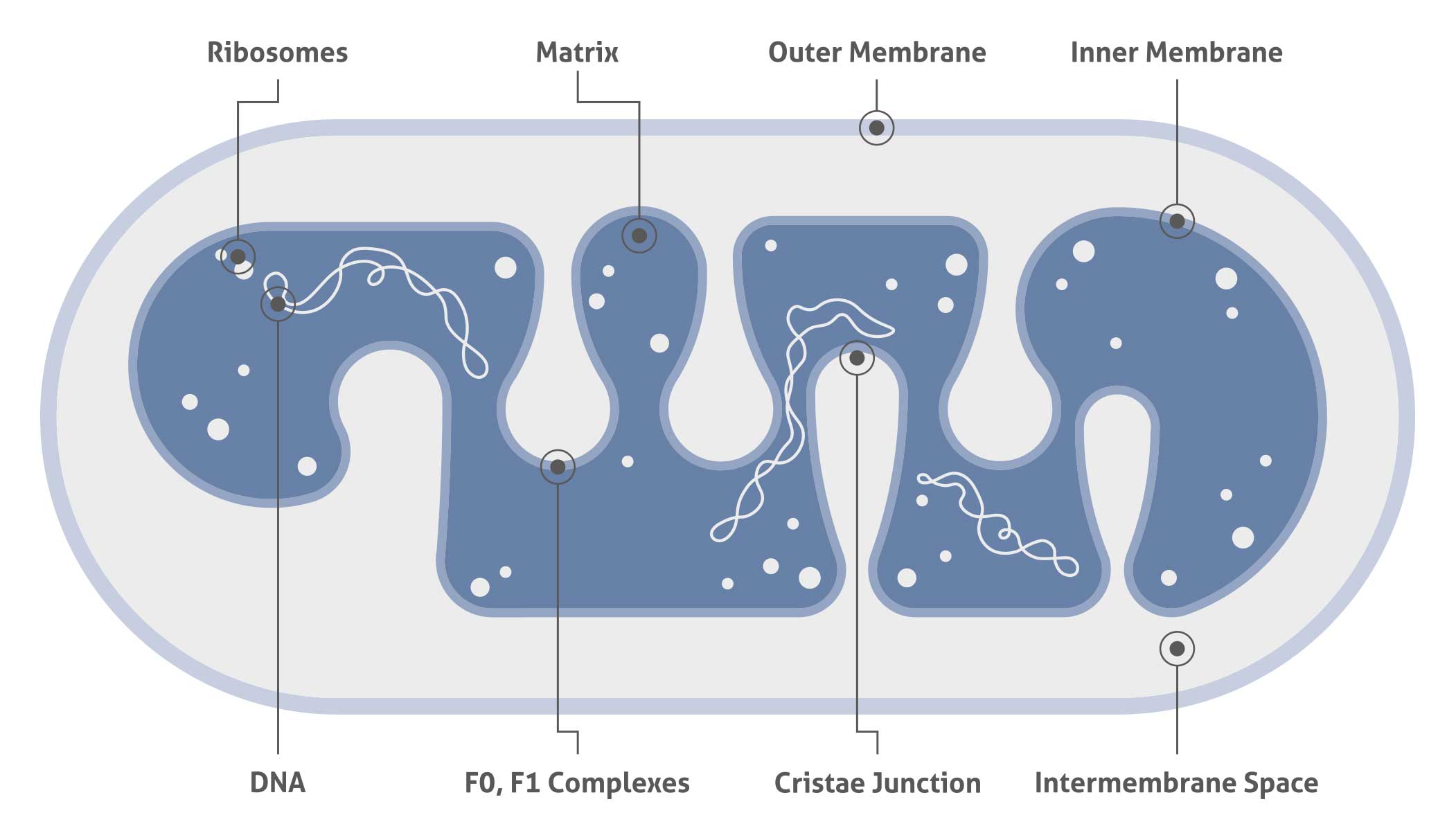 The citric acid cycle – also known as the tricarboxylic acid  (TCA)  cycle or the Krebs cycle – is a series of chemical reactions used by all aerobic organisms to generate energy through the oxidation of acetate derived from carbohydrates, fats, and proteins into carbon dioxide and chemical energy in the form of adenosine triphosphate  (ATP) . In addition, the cycle provides precursors of certain amino acids as well as the reducing agent  NADH  that is used in numerous other biochemical reactions.

In eukaryotic cells, the citric acid cycle occurs in the matrix of the mitochondrion. The reactions of the cycle are carried out by 8 enzymes that completely oxidize acetate, in the form of acetyl-CoA, into water and two molecules of carbon dioxide. 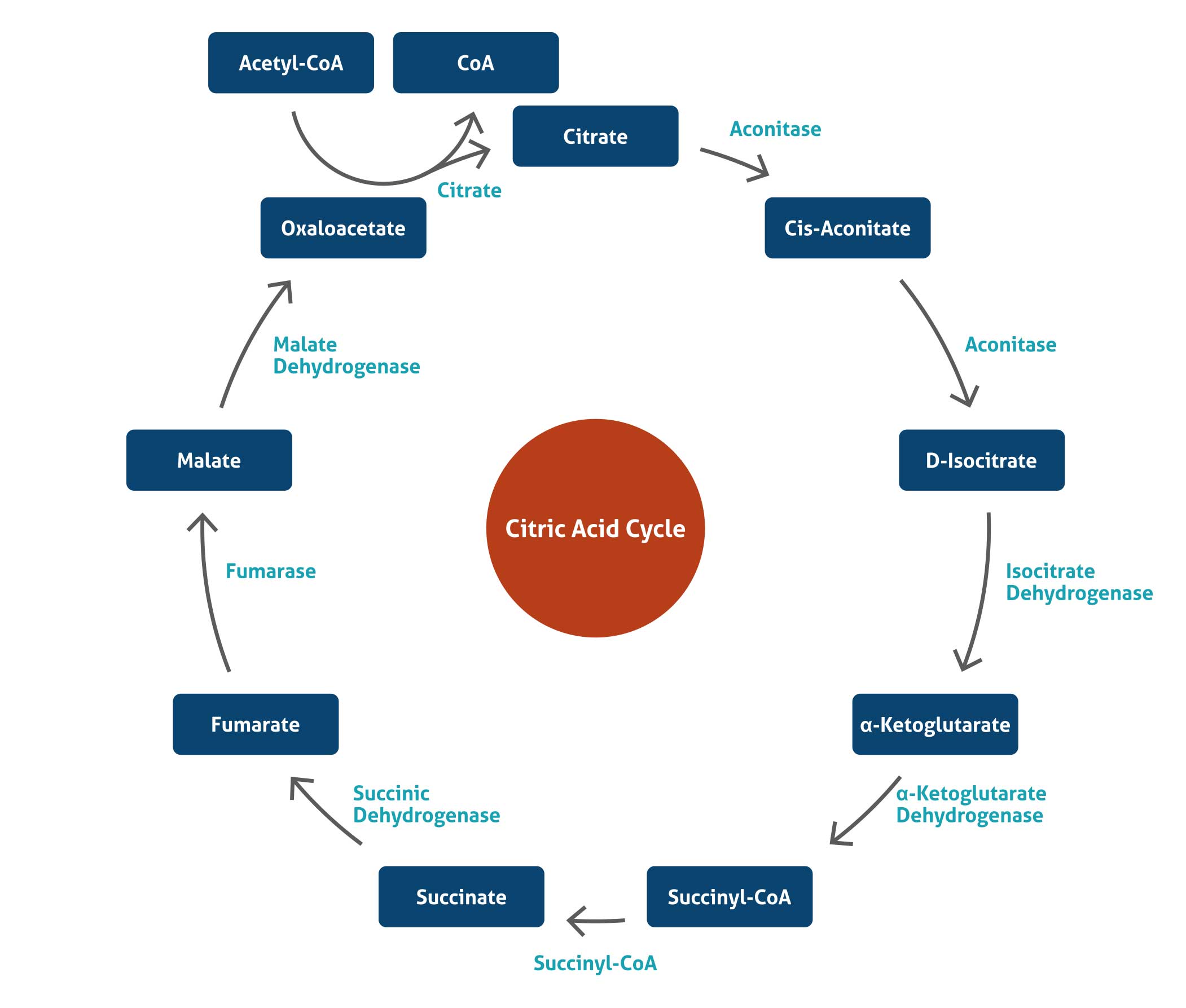 Cellular respiration is the process that releases energy from food and supplies energy for life processes. The mitochondrial respiratory chain is the final and most important step for cellular respiration, is located on the inner membrane of the mitochondrion, and comprises four large transmembrane protein complexes (respiratory chain Complexes I, II, III, and IV) (CI, CII, CIII, CIV) as well as ubiquinone between CI/II and III and cytochrome c between CIII and IV. The function of the mitochondrial respiratory chain is biological oxidation by transferring electrons from NADH and succinate to oxygen and then generating proton gradient across the inner membrane.

Mitochondria are integral to cellular function and are responsible for energy production in eukaryotes, synthesis of metabolites, phospholipids, and heme, and maintenance of calcium homeostasis. Mitochondria are remarkably dynamic organelles undergoing frequent fusion and fission events. The opposing processes of fission and fusion maintain mitochondrial morphology and it is this equilibrium that ensures maintenance of mtDNA and metabolic mixing, bioenergetic functionality, and organelle number. 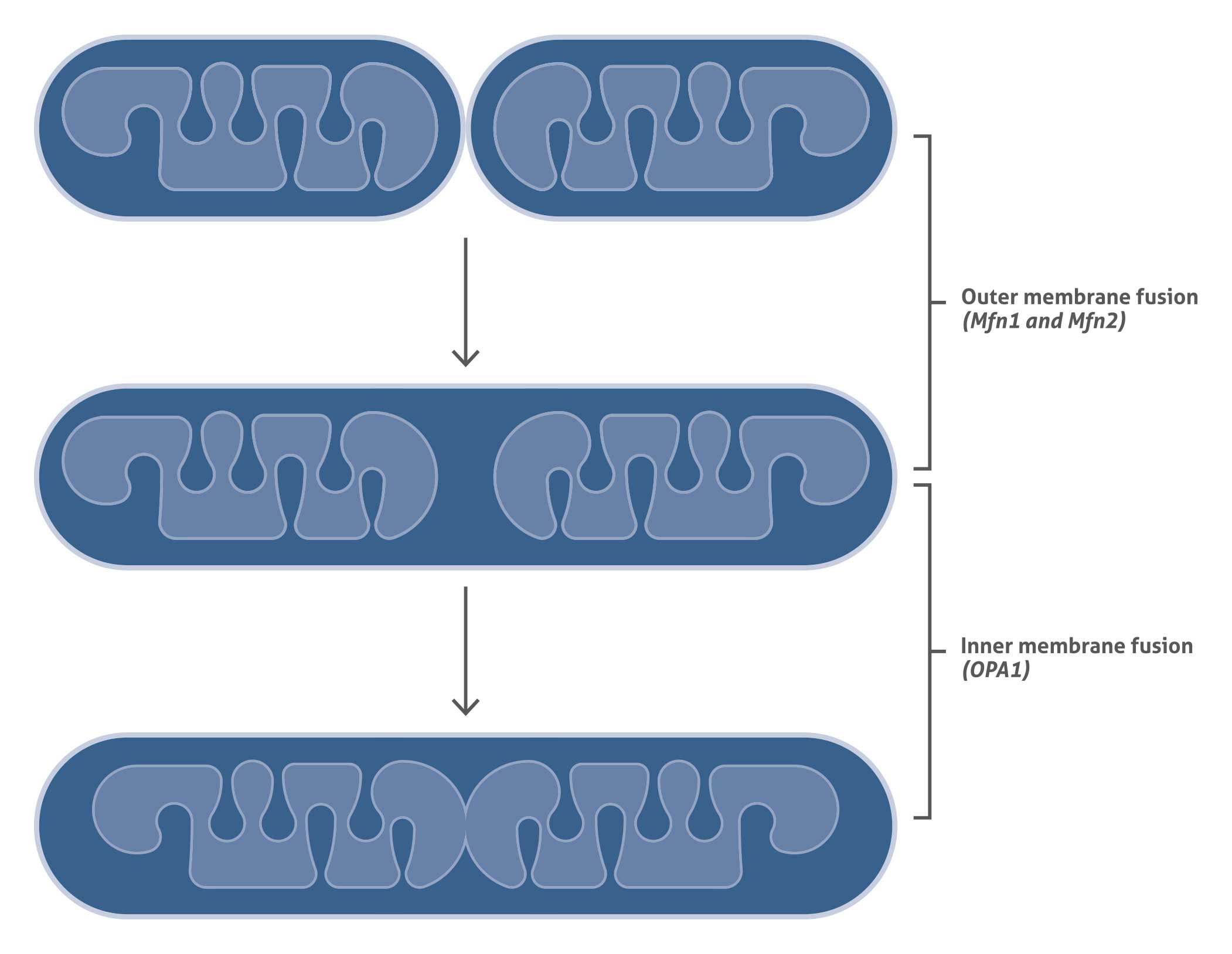 Apoptosis is the process of programmed cell death (PCD) that plays a central role in animal development and tissue homeostasis. There are two major apoptotic pathways known to date, initiated by either the mitochondria (the ‘intrinsic’ pathway) or the cell surface receptors (the ‘extrinsic’ pathway). Mitochondria-mediated apoptosis occurs in response to a wide range of death stimuli, including activation of tumor suppressor proteins (such as p53) and oncogenes (such as c-Myc), DNA damage, chemotherapeutic agents, serum starvation, and ultraviolet radiation. This pathway is initiated within the cell and results in increased mitochondrial permeability leading to the release of pro-apoptotic molecule cytochrome c into the cytoplasm. 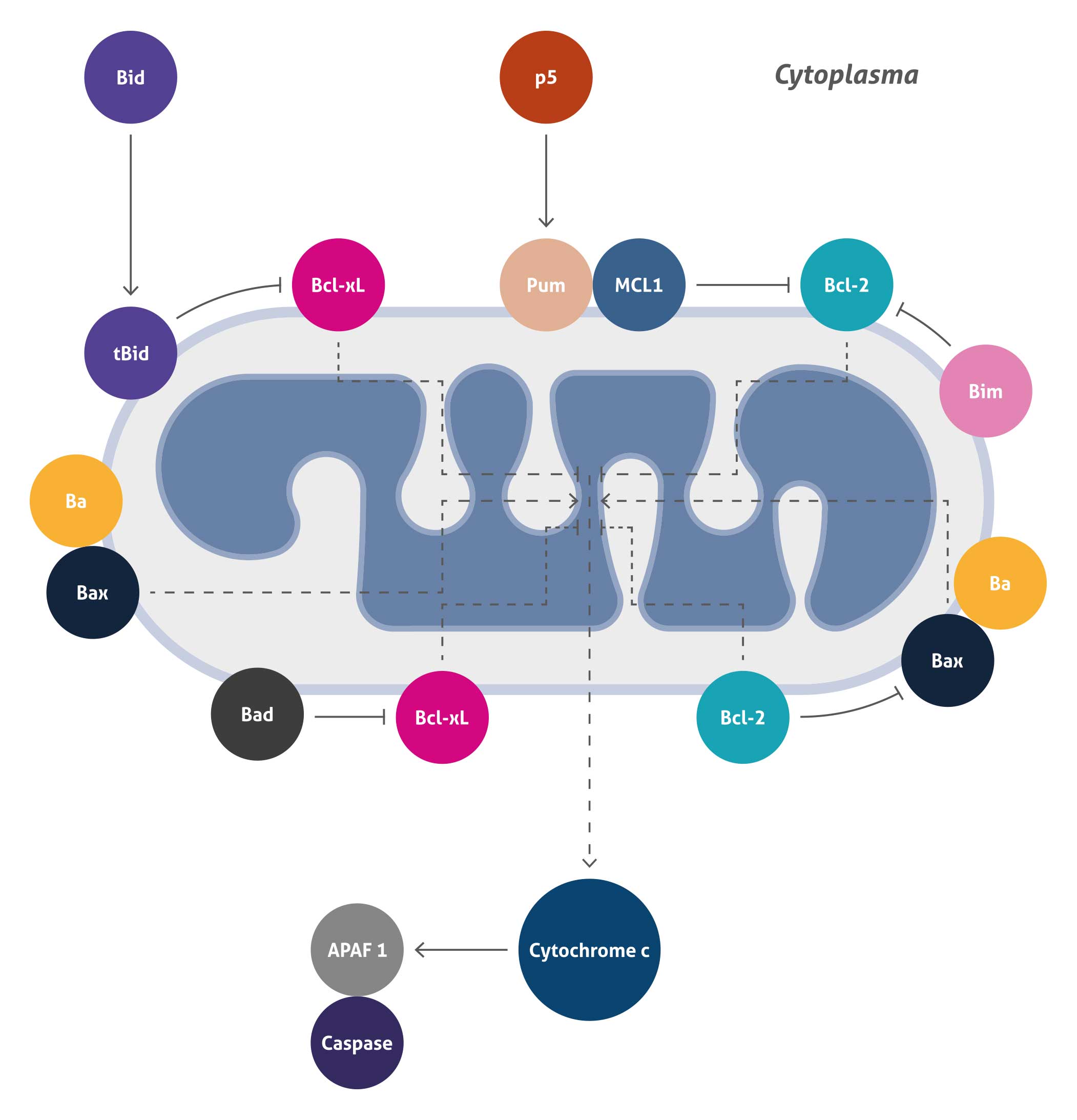 Mitochondrial autophagy is the process of selective removal of damaged mitochondria by autophagosomes and subsequent catabolism by lysosomes. One common mechanism is that mitochondrial depolarization results in PINK1 stabilization and Parkin recruitment to the mitochondria.

Parkin can ubiquitinate Mitofusins 1 and 2 (MFN1 and 2), hexokinases, TOM complex components, FIS1, BAK, MIRO, as well as VDAC, which may either be degraded through the proteasome or serve as binding partners for p62. p62 may in turn act as an adaptor molecule through direct interaction with LC3 to recruit autophagosomal membranes to the mitochondria. Parkin can also interact with Ambra1, which in turn activates the PI3K complex around mitochondria to facilitate selective mitophagy. 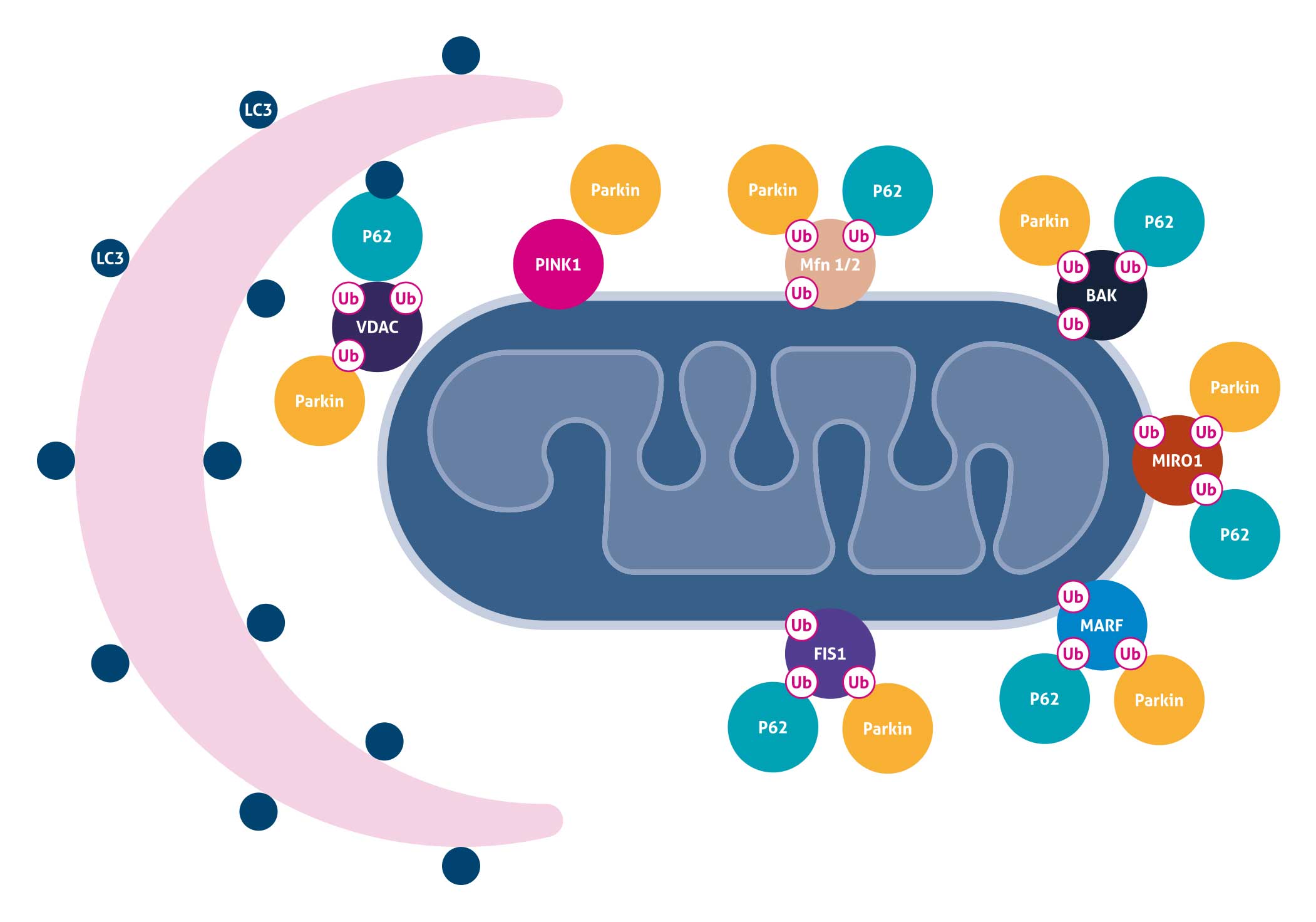 Upon synthesis on free ribosomes, mitochondrial precursor proteins reach the surface of the organelle in a process that is guided by cytosolic chaperones. Subsequently, they are imported by specialized protein import machineries and sorted to the designated submitochondrial destination in the outer membrane, inner membrane, intermembrane space, or matrix.