Recalling when and where: How the brain processes episodic memory

Neuroscientists based at MIT have recently identified a novel brain circuit that processes the ‘where’ aspect of memory. Pairing this with their previous work on how the brain remembers the ‘when’ component, we now possess a greater understanding of memory construction.

When you remember an event, you reassemble several separate pieces of information; as well as what happened and how you felt, you also collate data on when it took place and where. This form of memory is called episodic memory: the ability to recall a specific memory from your many previous experiences (which is undoubtedly incredibly useful to cognitive beings).

The hippocampus, a brain region well known for its critical role in memory processing, takes part in the formation of episodic memories. Though this function has been recognized for some time, it was not known precisely how the hippocampus handles the ‘when’ and ‘where’ aspects of an emerging memory.

A splitting of the ‘when’ and ‘where’ from a singular input was thought to occur within the hippocampus itself; however, the MIT team has now discovered this information enters the hippocampus as two separate streams, which originate from another region of the brain called the entorhinal cortex.

Islands (and oceans) in the stream

The entorhinal cortex sits at the base of the hippocampus and connects it to the neocortex (the outermost layer of the brain). It is home to some very interesting cell populations, including grid cells (which were also key to recent Nobel prize-winning work), head direction cells, and various other types of place cells. But more than just an internal global positioning system, the entorhinal cortex is also recognized for its role in both memory recording and recall. 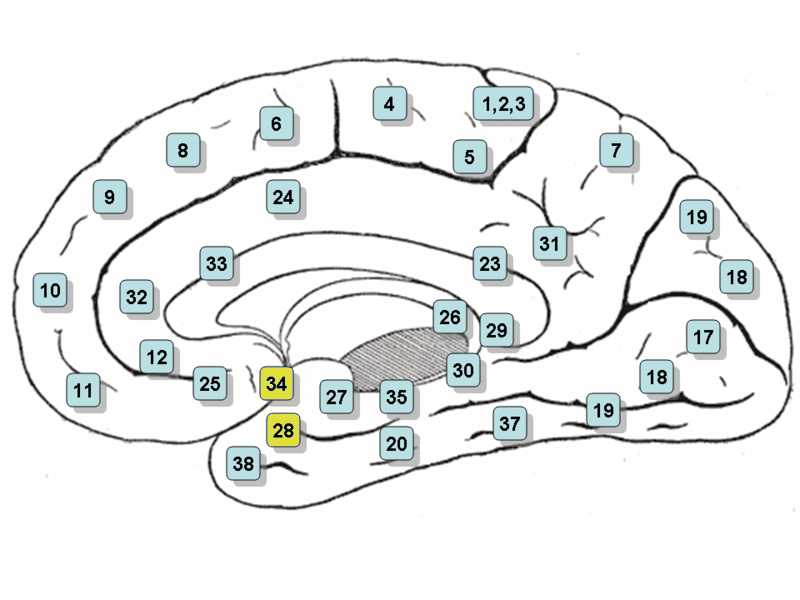 The MIT team, led by Nobel prize-winning scientist Susumu Tonegawa, has identified and characterized two types of cell in the entorhinal cortex that process the ‘when’ and ‘where’ signals. They have dubbed these ‘Island’ and ‘Ocean’ cells, respectively (so called as Island cells form small clusters around which Ocean cells gather).

Island and Ocean cells are distinguishable by their expression of certain neuronal markers: Ocean cells are identifiable as reelin-positive stellate cells (cells that have a star-like shape formed by their dendritic processes), whereas Island cells are pyramidal neurons (so named for their triangular-shaped cell body) that stain positive for CalbindinD-28K and a protein called Wolfram syndrome 1 (wolframin, or WFS1). Though wolframin expression is ubiquitous throughout the body, Tonegawa’s group has found that it is only present in Island cells in the entorhinal cortex. The group has used Proteintech’s anti-WFS1 antibody (11558-1-AP) to selectively stain Island cells in several papers.

Staining the two populations of cells with their specific markers allowed the Tonegawa group to map the trajectory of their connections to other parts of the brain. It became clear that Island cells and Ocean cells, though close in proximity, had different targets: Island cells plug into the CA1 region of the hippocampus, whereas Ocean cells connect to the dentate gyrus and CA3 region of the hippocampus. Clearly, these two cell types had separate functions for the lab to determine.

Shining a light on episodic memory

To further tease apart the functions of Island and Ocean cells, the Tonegawa group labeled them with a chemical tracer that fluoresces when bound to calcium (a basic indication of whether a neuron is ‘switched on’) (1,2). This enabled them to distinguish if and when each cell type was active in mice set various tasks requiring them to differentiate between two environments, or link events in time. A consistent change in the firing pattern of Ocean cells was recorded when mice were switched between two different environments. No such context-specific firing pattern was observed in Island cells (1), rather, they were more sensitive to variations in the speed of the animal (2).

The MIT team also utilized optogenetics, a powerful molecular tool that enables control of neurons using light, to block either cell types’ activity in isolation. When they blocked Island cell activity they found that mice exhibited impaired memory for ‘trace fear’ – a fear evoked by a specific cue that is harmless in isolation, but paired with an unpleasant stimulus, like a foot shock, after a set interval. The mice could not remember that a shock would soon follow the sounding of a tone; however, they maintained their contextual fear of the environment – they remembered where the shocks had taken place (3). Meanwhile, when Ocean cells were manipulated, the mice failed to associate their environments with fear after receiving foot shocks there (1).

So it seems that the ‘time stamps’ and ‘geotags’ of our memories have specialists on the case; Entorhinal Island and Ocean cells are dedicated processors of two extremely important elements of memory recall, enabling us to remember when and where.