A historical perspective on the production of phospo-antibodies.

Phosphorylation is a key way that cells toggle activity of their equipment, playing integral roles in processes spanning from embryonic development to apoptosis.

Cells are packed to the brim with protein, lipids, carbohydrates, nucleic acids, and others. To make sure all these substances work together to sustain life, they need to be regulated. Phosphorylation is a key way that cells toggle activity of their equipment, playing integral roles in processes spanning from embryonic development to apoptosis. But how does one create an antibody that can recognize the tiny bump that differentiates a phosphorylated state from a non-phosphorylated state? 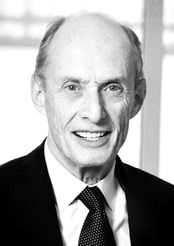 Paul Greengard is an American neuroscientist and Nobel prize winner best known for his work on the molecular and cellular function of neurons.

In 1992, Richard Epstein, Charles Stiles, and colleagues described an alternative, but similar method called Activation-Specific Phosphoprotein Immunodection (APHID) [3]. Two years later, Epstein and Stiles filed a patent for this method [4]. On the surface, this sounds like Epstein and Stiles have patented all production of phosphoprotein antibodies and could prevent any company from producing or selling phosphoprotein antibodies. However, the patent covers only one specific method; it covers neither the phosphoprotein antibodies themselves nor all methods of creating phosphoprotein antibodies. Although the general idea is the same as the Greengard laboratory (i.e., using a phosphorylated fragment as the antigen), APHID differs in a key detail. In the 1991 Greengard method, the synthesized polypeptide is phosphorylated using an appropriate kinase while the APHID method takes advantage of advances in chemical synthesis. Chemical methods of synthesis are more efficient and tractable than kinases. In the late 1990s, the Greengard laboratory updated the protocol further to reflect progress in chemistry and protein purification [reviewed in 5-6].

Today, phosphoprotein antibodies are made in a similar way to that described by the Greengard laboratory. Hundreds are now commercially available, providing essential tools for cancer research, development, and countless other fields.