Antibodies have been a critical reagent in biological research for decades. Recently, due to issues surrounding scientific reproducibility, there is a growing need for antibodies with extraordinary specificity and minimal lot variability. Until recently, this was not possible. However, recent advances in molecular biology and screening have enabled production of genetically defined, recombinant antibodies.

Due to their low lot-to-lot variability and high specificity, recombinant antibodies are being touted as the future of antibodies in research paving the way for researchers to have unrivalled reproducibility and trust in these reagents.

What are recombinant antibodies? 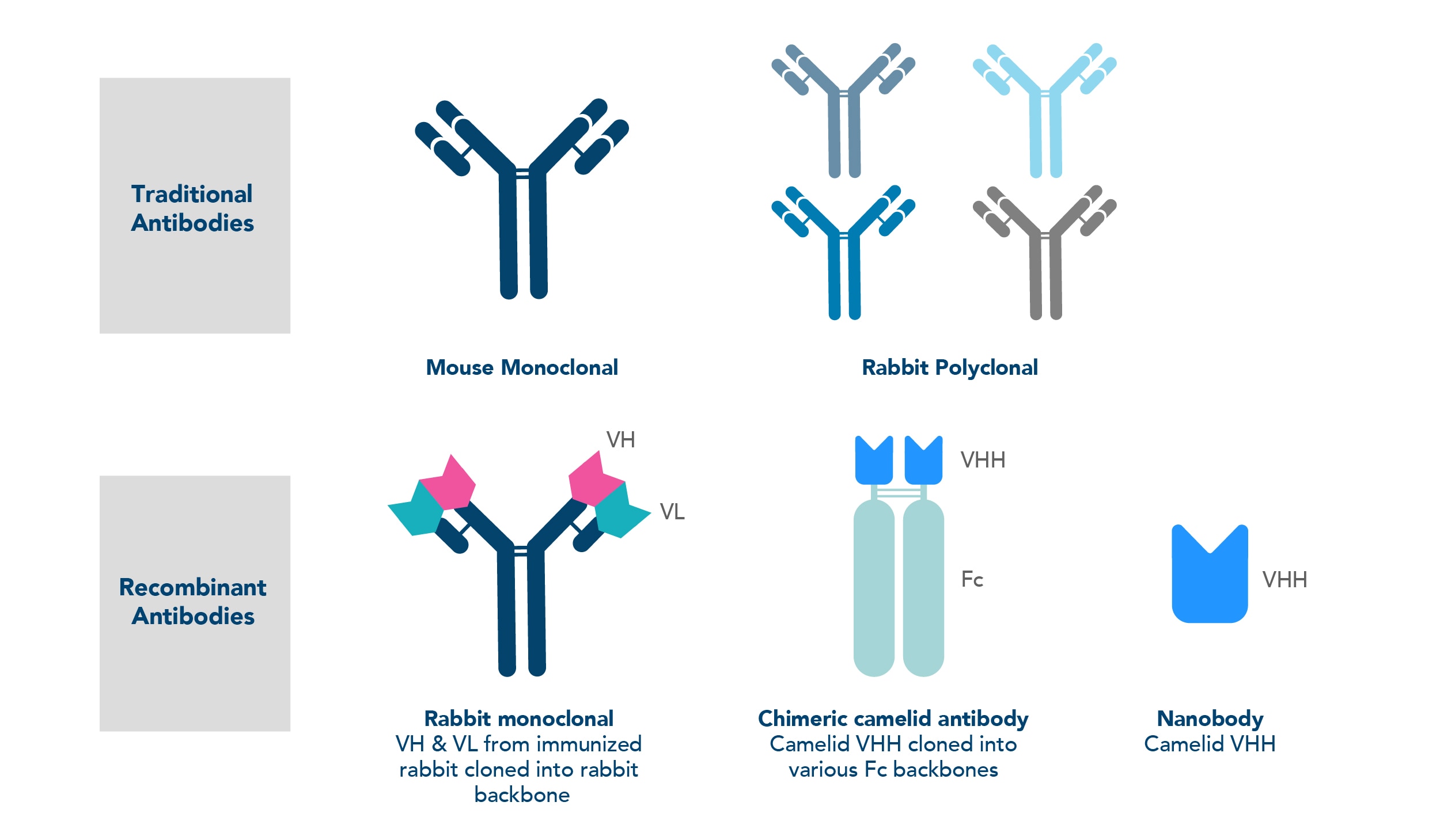 Why choose a recombinant antibody?

The storage of DNA libraries of antibody sequences and subsequent use of recombinant technology ensures that antibody production is highly consistent and reliable, minimizing the risk of genetic drift and providing superior antibody supply over time.

Once the sequence of an antibody has been cloned for recombinant production, it is then possible to modify the sequence in order to generate antibodies which can bind with higher affinity and specificity to its target. Antibody engineering also enables the creation of antibody “chimeras”, whereby the Fc portion of the antibody can be changed to that of a different species.

Some targets, such as specific protein isoforms or phosphorylated proteins can be very difficult to produce high quality and reliable antibodies using mouse hybridoma technology. Due to recombinant technology enabling antibody engineering from species with richer immune diversity than mice like rabbits and llamas,specific antibodies towards these hard targets can be produced.

The need for animal-free technologies is increasingly required and encouraged around the world. In recombinant production, once the antibody sequence is cloned following immunization, the need for animals is eliminated.This process can even create antibodies from non-traditional sources. For example, our SARS-COV-2 S-protein recombinant antibodies are derived from small samples of convalescent patient sera.

Proteintech’s recombinant antibody development starts with rabbit immunization. As the immune response peaks, antigen-specific single B cells from the rabbits are isolated using our proprietary technology. The selected B cells are then screened for their ability to produce antibodies with highest sensitivity and specificity. The genes for the antibody heavy and light chains from the selected B cells are then cloned into cell lines to express the desired antibody. These antibodies are extensively validated, adhering to the IWGAV (International Working Group on Antibody Validation) recommendation to prove the specificity, sensitivity, and reproducibility. 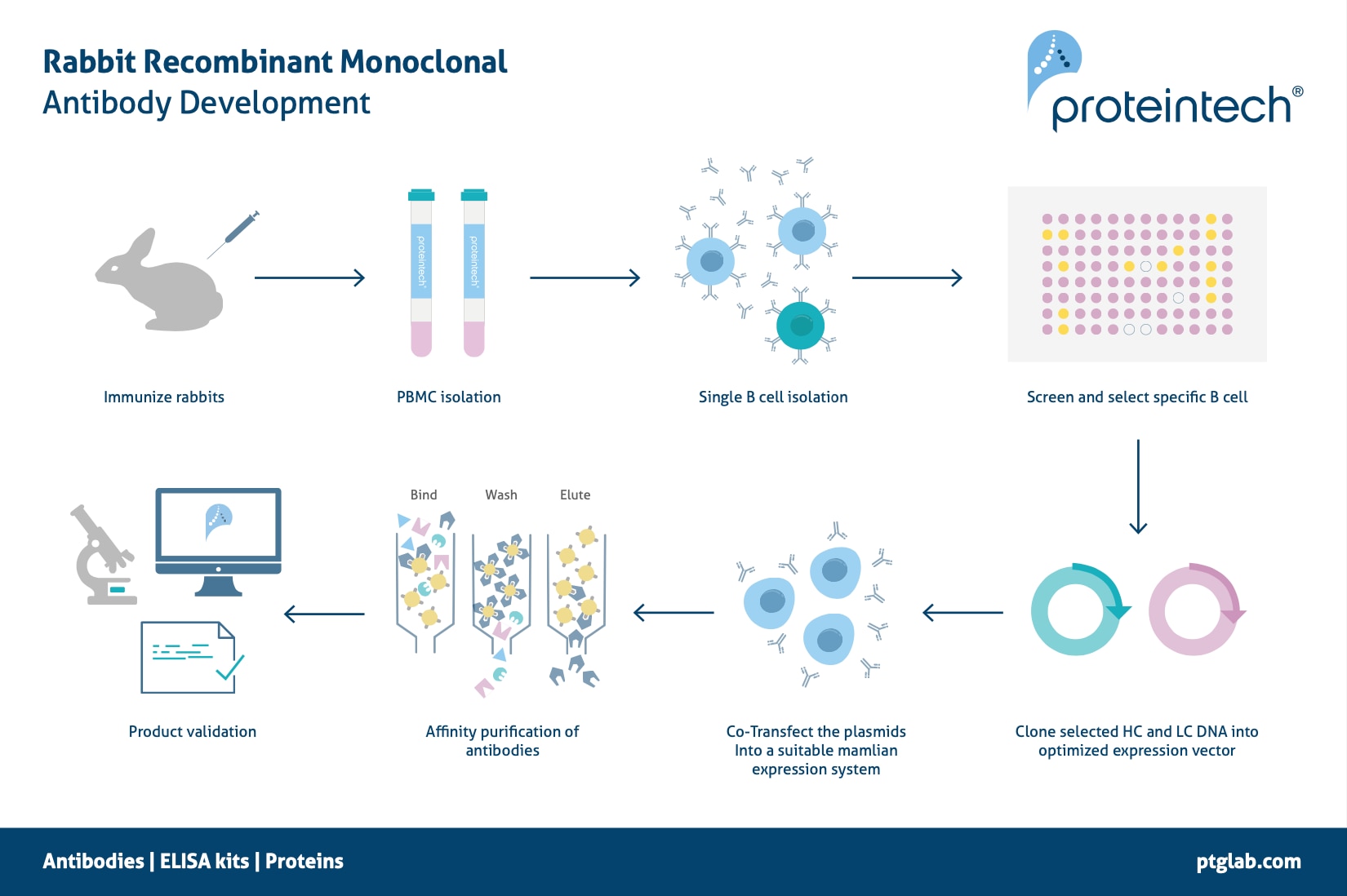 Nanobodies, the binding domains of heavy chain antibodies from Camelidae family members, can also be fused to Fc-domains to generate chimeric heavy chain antibodies. The Fc-domain fusion format combines the advantages of Nanobodies with those of traditional antibodies: The VHH/Fc fusions (i) are bivalent so they have even higher avidities and affinities than the parent Nanobodies, (ii) bind unique, 3-dimensinal conformations of epitopes not recognized by traditional antibodies, and (iii) can be detected and captured using tools from the broad range of antibody reagents like secondary antibodies and Nano-Secondaries. Like other recombinant antibodies, VHH/Fc-fusions are available with high lot-to-lot consistency at an unlimited supply. The Nanobody Fc-fusion recombinant antibodies have been developed in collaboration with Absolute Antibody Ltd.

Some quick example text to build on the card title and make up the bulk of the card's content.