FENS - the voice of European neuroscience

The 11th FENS Forum of Neuroscience took place in Berlin, Germany from July 7 to 11, 2018. Overall, it hosted over 7200 participants from more than 75 different countries.

Development, cognition, diseases of the aging brain, stem cells, and genetics – just a few of the topics covered at FENS 2018

The meeting showcased the best and most current developments in neuroscience and featured an exciting program, including talks from world-class speakers.

Workshops related to digital phenotyping featured a fascinating approach to the study of human behavior. Lectures about promoting myelin repair in multiple sclerosis and the related modeling of CRISPR/Cas9-based gene editing once again highlighted CRISPR/Cas9 as a great tool for creating new methods of treatment for many different diseases.

There was also an interesting symposium about stem cells and the brain: neurons, niches, and organoids. It is fascinating to realize that subtle differences in corticogenesis between humans and other species largely underpin what makes us human. In addition, these lectures served to highlight the great potential of human iPSCs to explore human-specific mechanisms of neural development and disease.

Proteintech exhibited at the meeting, showcasing our catalog of antibodies, ELISA kits, and proteins, in addition to a new product range: Humankine active cytokines & growth factors.

Congratulations to the winners of the 2018 Proteintech FENS travel grant.  From the left: 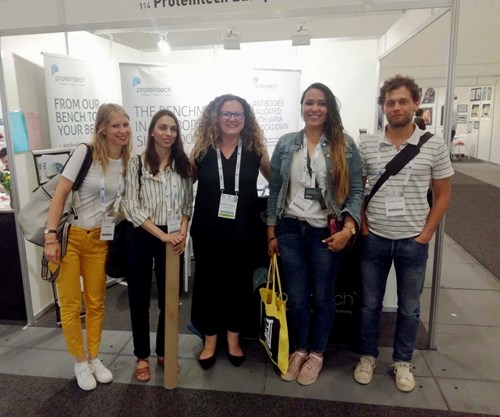 All four winners were each awarded €500 to attend the FENS Forum in Berlin, in addition to certificates of their travel grant win.

Monique works with a drug that is extracted from a Brazilian plant. Her results show promise for the treatment of neurodegenerative diseases, with both herself and her colleagues having demonstrated that the drug acts in the control of neuroinflammation and oxidative stress and also in promoting the differentiation of immature cells to a mature profile. It is a natural product that may have less adverse effects, in addition to being easily produced. After finishing her PhD, Monique would like to continue working in the neuroscience field, focusing particularly on neurodegenerative diseases and their involvement with the neuroimmune system in her future post-doc position.

Raquel’s project involves the transplantation of fluorescently labeled human iPSC-derived neurons into the mouse cortex and then the performing of longitudinal live imaging of both their neuronal structure and function. This allows her to explore the dynamics of neuronal development in a more physiological environment than in vitro culture. This system is also powerful for modeling human neurodevelopmental disorders and she is currently investigating defects in the development of neuronal networks in neurons derived from patients with Down syndrome. She is currently completing her PhD and afterward will embark on a new position as a clinical research fellow in London. How exciting!

Stefano Espinoza, our post-doctoral winner, said: “The most exciting part of my project is that in our laboratory we are developing a new method – SINEUPs – to increase the endogenous protein levels of target genes. SINEUPs is a novel class of non-coding RNA that increases protein expression. This could be a novel way to make gene therapy in a more precise and specific way. We are about to send our paper out and we are already working on a new topic related to SINEUPs with a focus on the mechanism of action behind it.”

Irene Busti was our youngest travel grant winner and is currently a second-year PhD student. Her project is about new strategies for motor recovery after ischemic injuries. She is working on stem cell transplantation as a potential improvement for functional recovery after ischemic damage. As we know, the crucial goal of cell replacement is the ability to produce the required neural cell type. Her lab team has recently developed a specific differentiation protocol that enables the production of either hippocampal or cortical neurons from murine embryonic stem cells. They compared the ability of these cells to generate long-range projections in a region-specific manner after transplantation in a healthy or damaged brain. When asked about how she plans to progress with her research and what her future plans are, Irene replied: “First, we will perform electrophysiological and optogenetic experiments in vivo, in order to check the functional integration of transplanted neurons and to verify the functionality of their connections. Then, we would like to develop a new cell therapy approach for functional restoration after stroke in which a combination of treatments (consisting of motor training and enhanced circuit plasticity) may lead to additive or even synergistic improvements in recovery from cortical infarcts.” It sounds like a great plan to me, and I’m sure she’ll be getting her PhD very soon!

All of us at Proteintech would like to thank the FENS Organising Committee, everyone who presented their research as well as all of our Travel Grant winners for such an amazing meeting

I was really impressed by your research projects. Hopefully, we’ll see you again in the near future! 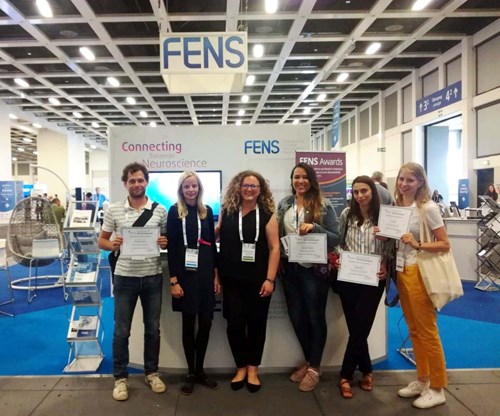