Improve your immunofluorescence in cleared tissue with expert tips from our guest blogger, Ashley Juavinett.

As early as 1914, there are documented attempts to try to “clarify” organ tissue, with the goal of enabling the study of these organs by removing light-scattering molecules. While many of those initial approaches are  still being used today, researchers have recently returned to this century-old problem, with the hope of making the process compatible with modern techniques such as endogenous fluorescent proteins, in situ hybridization, and immunohistochemistry.

In 2013, Karl Deisseroth and his team made waves when they demonstrated  advanced techniques to completely clear the brain, and by extension, other organs (Chung et al., 2013). Not only would this development save countless undergraduates from spending their summers in front of a microtome, but it also held promise of being able to visualize long-distance brain connectivity, with multiple rounds of immunostaining on the same tissue. 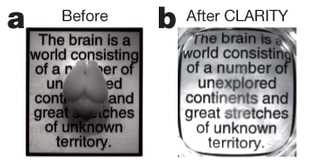 A demonstration of the powerful effect of CLARITY. From Chung et al., 2013.

Another method, known as PACT (“Passive Clarity Technique”), was subsequently published, and has since become a rival method for clearing brain tissue (Yang et al., 2014). In fact, many different methods have been published in the past five years, each with their own pros and cons (see table below). While some of these techniques are “active” - requiring electrophoresis or some other method to clear the tissue - most are “passive,” where the tissue is simply placed in multiple rounds of solutions to effectively remove the lipids.

PACT clearing permits the labeling with a variety of common histological markers. From Yang et al., 2014

(Links to publications can be found at the foot of the article.) 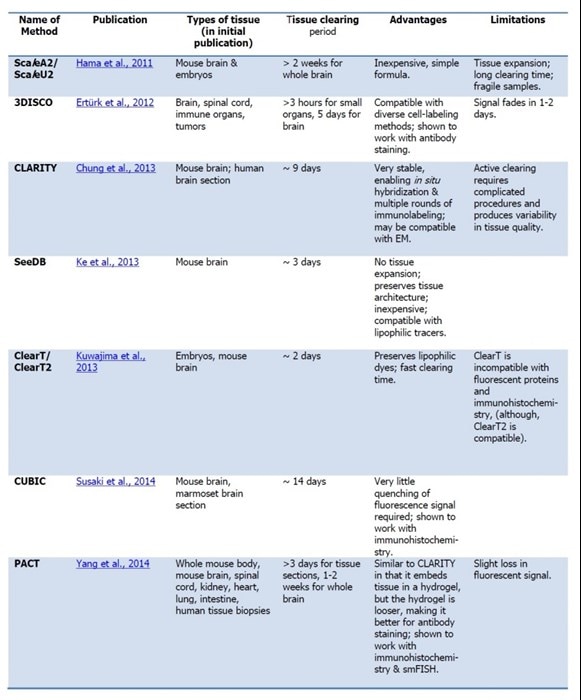 Since the development of these techniques, various labs have successfully immunostained cleared tissue, suggesting that this is indeed a viable method (e.g., Chung et al., 2013; Zhang et al., 2014). Still, not much has been said about the potential for multiple rounds of label beyond the initial CLARITY report. We spoke with several individuals* who have used these methods, and collected a few tips on how to make the best of your cleared immunostaining:

In general, the best thing to do is change the size of tissue, length of incubation, type of clearing, and concentration of antibody until you’ve achieved optimal labeling.

Do you have any experience with using clearing in conjunction with antibody labeling, particularly with Proteintech products? We’d love to hear about it!

* Thanks to Dr. Esther Richler & other members of the Callaway Lab for advice and insight!