The Complexity of Proteins

How do proteins have so much functional diversity based upon only 20 building blocks?

There are over 20,000 different proteins in the body (1). How do proteins have so much functional diversity based upon only 20 building blocks? The answer lies in the complexity of primary, secondary, tertiary, and quaternary structure (Figure 1). 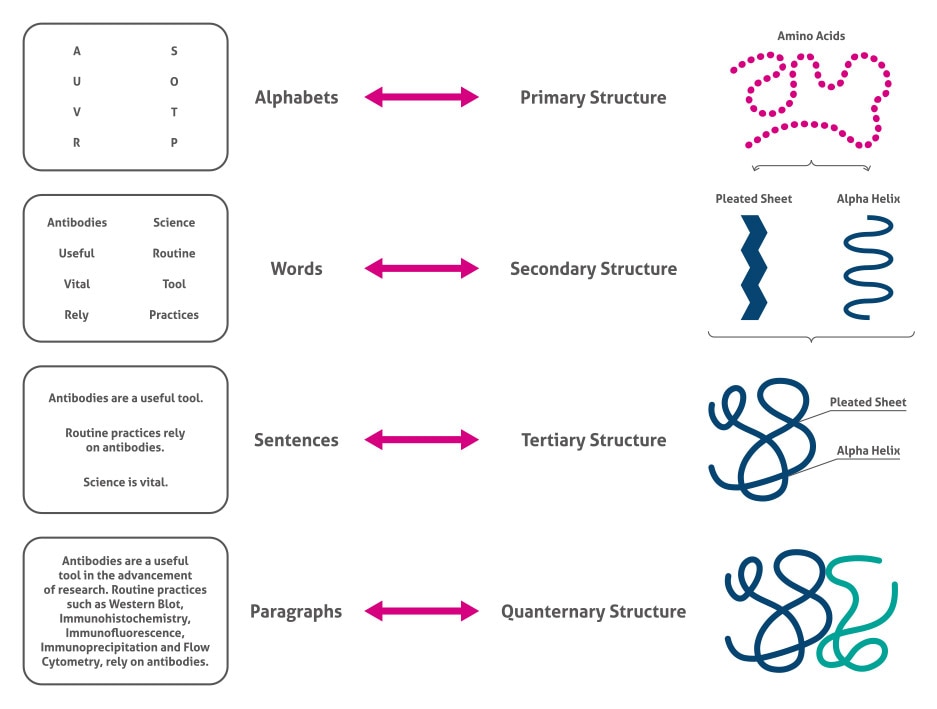 The primary structure consists of the amino acid sequence of the protein. Even at this level, there is substantial biochemical complexity including the acidity, size, hydrophobicity, and charge conferred by the different amino acids. Regarding acidity, there are three types of amino acids; neutral (e.g. alanine), acidic (e.g. aspartic acid), and basic (e.g. arginine).

The secondary structure consists of the small-scale 3D structures caused by the interactions between the amide groups. The major classes are alpha helices and beta sheets. Alpha helices are right-handed coiled structures. The variable groups are facing outward, and the structure is held together by hydrogen bonds between the N-H group of one amino acid and the C=O group of the 4th amino acid. For example, myoglobin is a protein with multiple alpha helices. Beta sheets are a pleated structure formed by the interaction of N-H and C=O groups of neighboring strings of amino acids. Fibroin, a major component of silk, is almost entirely beta sheets (2).

Tertiary structure is the large-scale 3D conformation of the protein caused by the numerous interactions between side chains, alpha helices, and beta sheets. Although computational methods are constantly improving (3), X-ray crystallography is still the most reliable method of discovering the protein’s shape (4).

Lastly, quaternary structure is the arrangement of several protein subunits in a complex. Examples of complexes with quaternary structures include antibodies and hemoglobin. Besides these four levels of structure, proteins can be further altered for function by post-translational modifications. Find out more in our Blog article.