What is one-step immunostaining?

This method reduces incubation time, hands-on time and the number of washing steps.

What is one-step immunostaining?

Nano-Secondaries meet the above requirements and are therefore ideal probes for one-step staining. The parallel incubation of primary antibody and Nano-Secondary supports multiplexing in immunofluorescence and Western blotting, live-cell immunostaining, and improves cell viability for flow cytometric analysis.

Why is using a Nano-Secondary beneficial for one-step immunostaining?

Nano-Secondaries are ideal probes for one-step staining since they are monovalent and 10 times smaller than conventional secondary antibodies.

Their small size leads to just a minimal increase in size of the resulting complex with the antibody. The small size of the primary:secondary complex allows easy target access and enables fast penetration even into dense tissue. In addition, the small size of a Nano-Secondary decreases the distance between target and label, which leads to higher imaging resolution.

Nano-Secondaries have a very high specificity; they are even subclass-specific and do not cross-react with IgGs from other commonly used species.

Why do I need a Nano-Secondary with high affinity and specificity?

A high affinity of the Nano-Secondary to its target IgG is important to ensure proper complex formation and facilitates detection of low abundant targets. Notably, the high specificity of the Nano-Secondary (which has been carefully determined and can be found in the product specification sections here) are needed when multiple primary antibodies are used for multiplexing. ChromoTek Nano-Secondaries have a very high specificity; they are even subclass-specific and do not cross-react with IgGs from other commonly used species.

Where can I find a one-step staining protocol? 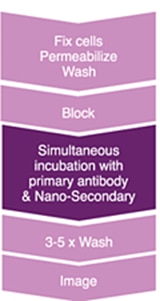 It is recommended to use different species and/or subclass primary antibodies.

Do Nano-Secondaries also work in a sequential staining approach? 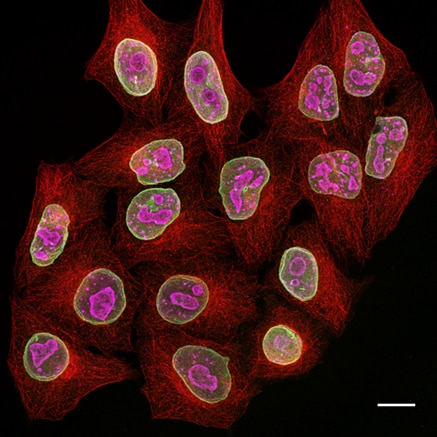