The cytoskeleton is a three-dimensional network supporting and stabilizing the cell.

The cytoskeleton is a three-dimensional network supporting and stabilizing the cell.

The cytoskeleton is a three-dimensional network supporting and stabilizing the cell. All cells, even bacteria, have a type of cytoskeleton. It is responsible for the shape of the cell and its mechanical properties. Many dynamic cellular processes cooperate with the cytoskeleton, such as cell motion, cell division, intracellular transport, and cell signaling. Therefore, the cytoskeleton interacts with several cytoplasmic proteins or organelles.

The cytoskeletal network is composed of three different protein structures named filaments: microtubules, microfilaments (actin), and intermediate filaments. These proteins form their own unique networks within the cell that have different interdependent functions. 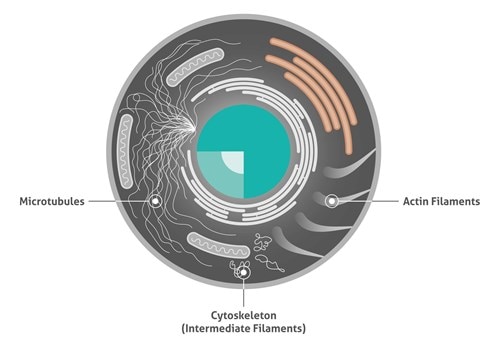 Most popular cytoskeleton markers from Proteintech

Actin is an abundant protein in all eukaryotic cells. Monomers of the globular actin (G-actin) polymerize to form actin filaments (F-actin), long and thin fibers. These fibers have a diameter of ca. 5–9 nm and form the thinnest of all cytoskeleton fibers. Therefore, they are also named microfilaments. Actin filaments are very flexible and show a helical structure.

Actin filaments form bands close to the plasma membrane. They can form their own network, shaped by several actin-binding proteins. Many different cellular processes related to cell shape or cell motion depend on actin filaments. They are responsible for the mechanical strength of the cell and connect cytoplasmic and transmembrane proteins.

Microtubules form the most rigid part of the cytoskeleton and are responsible for the intracellular movement of organelles or proteins. Microtubules are 20 nm in diameter and are composed of alpha and beta tubulin subunits. The formation of microtubules depends on the temperature and available tubulins. Microtubule-associated proteins (MAPs) regulate the dynamics of microtubules within a cell.