Proliferation can be measured through dye incorporation into live cells, by measuring the protein levels of key proliferation markers that typically look at DNA levels or synthesis, cellular metabolism, or proliferation-specific proteins.

To proliferate, cells need to synthesize DNA during the S phase. Thus, a common and reliable method for assaying cell proliferation is a measurement of DNA synthesis. Typically, this is done by incubating live cells with compounds/dyes that can easily be incorporated into newly synthesized DNA. Thymidine analogs are the most popular compound for incorporation into DNA.

Bromodeoxyuridine (5-bromo-2'-deoxyuridine, BrdU, BUdR, BrdUrd) is a synthetic nucleoside, an analog of thymidine (Figure 1). It is commonly used in the detection of proliferating cells in living tissues. BrdU can be incorporated into the newly synthesized DNA of replicating cells (during the S phase of the cell cycle), substituting for thymidine during DNA replication. IHC detection of BrdU incorporated into DNA is a powerful tool to study the cytokinetics of normal and neoplastic cells, and also to detect a sensitive rare cell population, such as hematopoietic stem cells (HSCs) or progenitor cells (1). BrdU labelingof tumor cells in vitro and in vivo and the subsequent detection of incorporated BrdU with specific anti-BrdU antibodies is broadly used as a powerful tool to quantify the degree of DNA synthesis (Figure 2). 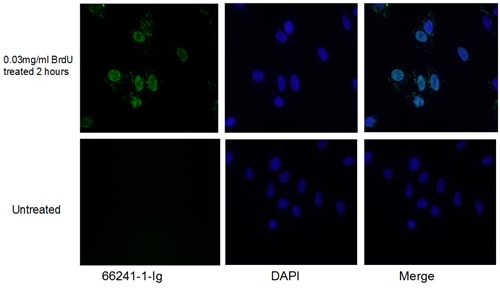 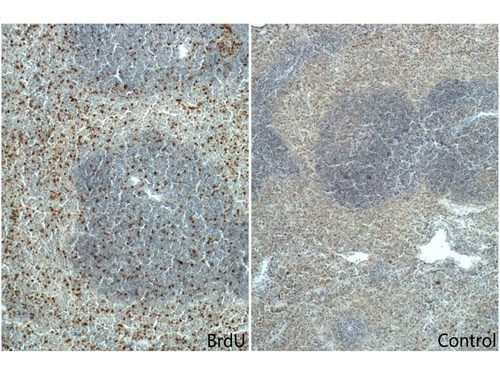 Ki67 – the sensitive and the specific marker for proliferating proteins

Another way to research cell proliferation is by looking at the specific proteins that are expressed in proliferating cells exclusively. The Ki-67 protein (MKI67) is a cellular marker for cell proliferation (Figure 3). Ki67 is present during all active phases of the cell cycle (G1, S, G2, and M) but is absent in resting cells (G0). The nuclear expression of Ki67 can be evaluated to assess tumor proliferation by IHC (Figure 4). Ki67 is a popular proliferation marker and is routinely used in pathology labs due to its diagnostic and prognostic power in cancer. Recent studies have reported an association between high proliferative activity and cancer prognosis (2,3).

Even though BrdU and Ki67 are broadly used as proliferation markers and usually show similar expression patterns, they stain different groups of cells. BrdU labels cells during the S phase, whereas Ki67 labels cells in the G1, S, G2, and M phases (only Go cells should be negative for Ki67). However, using only one marker may yield only partial information, while using both will ensure and enhance the reliability of the obtained results (4).

How to explain different results while working with BrdU and Ki67 for cell proliferation assay.

BrdU is a good marker for conducting time-course studies and is expressed during DNA replication and repair. Ki67 marks cells that are NOT in the G0 phase. Ki67 is strictly expressed during all stages of cell proliferation from G1, S, G2, and mitosis and is considered to be a better marker for cells in growth fraction. The S phase is constant (+/- 8 hours), whereas the overall cell cycle time is typically 24 hours, but possibly even a few days. Ki67 may even stain 3x as many cells compared to BrdU.

2. Ki67 is a promising molecular target in the diagnosis of cancer (review).

3. Calculation of the Ki67 index in pancreatic neuroendocrine tumors: a comparative analysis of four counting methodologies.

4. Accurate determination of S-phase fraction in proliferative cells by dual fluorescence and peroxidase immunohistochemistry with 5-bromo-2'-deoxyuridine (BrdU) and Ki67 antibodies.