How Nanobodies could advance Sars-CoV diagnostics

Teresa Wagner and Ulrich Rothbauer discuss the development of Nanobodies against SARS-CoV-2 and why Nanobodies are versatile alternatives to classical antibodies in SARS-CoV-2 research.

Nanobodies as versatile alternatives to antibodies

The COVID-19 pandemic has presented an unprecedented challenge, with no end currently in sight. The global effort to develop the first vaccine against the emerging SARS-CoV-2 virus put the spotlight on basic research in a bid to overcome the pandemic. It was in this context that the potential versatility of single-domain antibodies, better known as nanobodies (Nbs), was revealed.

In March 2020, we began the first mammalian expression constructs encoding different fragments of the SARS-CoV-2 spike protein to generate virus-specific antigens for the serological testing of individual immune responses. However, there was also an urgent need for high-affinity SARS-CoV-2 capturing tools for basic research, or even neutralizing molecules for therapy. We therefore also decided to generate SARS-CoV-2-specific Nbs by using the receptor-binding domain (RBD) as an antigen for immunization. RBD has been shown to be highly immunogenic. This enabled us to identify a large number of Nb candidates, some of which even have strong binding affinities in the low nanomolar range. 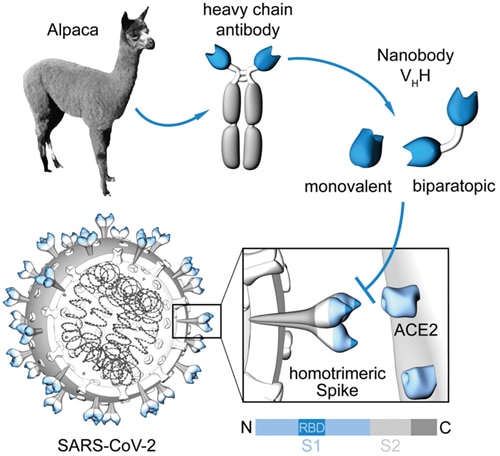 Seeking to identify neutralizing Nbs that block the interaction between SARS-CoV-2 and angiotensin-converting enzyme 2 (ACE2), we began an in-depth characterization of these binders. Following an in vitro ACE2 competition assay and a virus neutralization test (VNT) using the original SARS-CoV-2 strain, we selected five highly neutralizing Nbs for which we identified the detected epitopes within the RBD using HDX-MS technology. Thus, we showed that some of the Nbs bind directly to the ACE2 interaction site, whereas others recognize an epitope outside this region.
In particular, for two of the selected Nbs, NM1226 and NM1230, structural complex analysis provided an unprecedented insight into the detected epitopes. From these findings, it became clear that Nb NM1230 directly interacts with residues of the RBD that are susceptible to immune escape mutations such as K417, L452, and E484 found in the current variants of concern (VOC) – for example, the alpha, beta, or delta variants – whereas the neutralizing NM1226 binds a conserved epitope that remains unchanged in these variants. 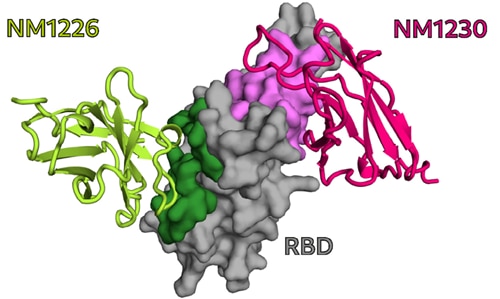 This brought us to the idea of creating a biparatopic Nb (bipNb) that combines both Nbs in one binding molecule. The bipNb, called NM1267, showed a dramatically increased affinity with a KD of 480 pM and an IC50 of 890 pM in the viral neutralization assay. Notably, it also binds the RBDs of all currently reported VOCs with comparable efficacies.

Continuing our study, we integrated the bipNb into a competitive serological binding assay, the NeutrobodyPlex. By targeting displacement with the bipNb, we were able to monitor the amount of neutralizing antibodies from serum samples of infected or vaccinated individuals on a high-throughput basis. This can be used, for example, to check whether an infected person has produced antibodies that protect against re-infection, or to assess the success of vaccination responses. Notably, the indirect measurement of antibody levels provides rapid results in a wide range of samples and does not require S3 safety level laboratories for a VNT, as was previously the case.

This study perfectly demonstrates how target-specific Nbs against SARS-CoV-2 can be generated and applied to the diagnostic testing of a neutralizing immune response. Compared to conventional antibodies, they offer numerous advantages, including accurate knowledge of the recognized epitopes, flexible integration into multiparatopic constructs, and ease of production. In combination with a high thermal stability and long shelf life, SARS-CoV-2 Nbs are ideal diagnostic tools for application as surrogates, and capture or detection reagents. More recently, we launched the first studies aimed at elucidating the therapeutic potential of the bipNb. The promising results have made us very confident to further develop the bipNb as an easily administered prophylactic or therapeutic agent for the treatment of persons infected with SARS-CoV-2.

Conventional antibodies (immunoglobulins, IgG) consist of two identical long (heavy) and two identical short (light) protein chains that together form the characteristic ypsilon-shaped structure. The variable domains located at the end of each heavy and light chain give the respective antibody its unique binding properties for almost any desired target. Since antibodies are evolutionarily highly conserved, it was a great surprise when scientists at Vrije Universiteit in Brussels discovered in 1993 that members of the camelids such as camels, alpacas, llamas, and dromedaries are not only cute, fluffy animals but also possess an additional form of immunoglobulin, so-called “heavy chain only” antibodies. Remarkably, these binding molecules comprise a fully functional binding site consisting of only one single variable domain. Due to its extraordinarily small size (2.5 nm in diameter, 4 nm in length), Ablynx, in 2001, called this single-domain antibody fragment a “nanobody (Nb),” a term that has since become generally accepted. Nbs are characterized by their high solubility, thermal and chemical stability, high tissue penetration, and low immunogenicity. Moreover, Nbs can easily be genetically modified to generate multivalent and/or multiparatopic Nb constructs that exhibit higher avidity and/or desired multispecificity. Their cost-effective production in microbial systems makes Nbs an attractive alternative to conventional IgGs for biomedical research, diagnostic, or therapeutic applications.

Neutralizing antibodies and their role in COVID-19 research

How fluorescent proteins can be applied in SARS-CoV-2 research