Primary Cilia and Regulation of Blood Pressure (“The Silent Killer”)

Discovering cilia’s role as a regulator of arterial blood vessels and its involvement in disease.

Whether it’s a routine visit to the doctor or dentist, an urgent care visit, or a trip to the emergency department, one of the first measurements taken from you is your vital signs—which typically include your temperature, heart rate (pulse rate), and blood pressure. In addition to your body’s temperature, your heart/pulse rate and blood pressure are considered first-line measures of overall physical health. The reason? Taken together, heart rate and blood pressure are a global/general overall measure of your body’s ability to pump and deliver blood to ALL of the cells, tissues, and organs in your body. More specifically, when we take a deep breath and inhale into our lungs, oxygen from the air we breathe is transferred to the red blood cells in the bloodstream and transported by our blood vessels, where it is then pumped through our hearts for delivery to all of the body’s cells. After oxygen is delivered, the bloodstream retrieves/disposes of de-oxygenated blood filled with noxious metabolic by-products,  a process also made possible (and mediated) by the blood vessels (arteries and veins) that make up the human circulatory system. The pumping, movement, and delivery of blood are maintained by the tight fluctuations of vasoconstriction (tightening/narrowing) and vasodilation (loosening/widening) of the smooth muscle layer of arterial blood vessels. From the earliest infant stages to the end of life, both in health and the presence of disease, the maintenance of blood pressure is indisputably one of the most critical functions of the body and blood vessels in sustaining life.

In patients with high blood pressure, the arterial blood vessel becomes chronically “tense” (hence, the name hypertension), or constricted—so instead of the blood flowing freely through an opening similar to the inside of a pipe, it is instead forced through a tube with a much smaller opening, similar to that of a straw. Because of the large amount of blood that needs to travel through the blood vessels to deliver oxygen all over the body, the pressure of the blood flow against the restricted walls of the blood vessel increases drastically. Often referred to in the scientific literature as shear stress, sustained and increased pressure on the walls of the arterial blood vessels can lead to permanent damage to the plasticity of the vessel wall, making it vulnerable to injury and consistent with a variety of cardiovascular diseases outside of high blood pressure itself (Hierck BP et al., 2008 Dev Dyn). Examples of cardiovascular diseases resulting from damage to arterial blood vessel walls include atherosclerosis, thrombus formation leading to occlusion of a vessel, ischemia and/or stroke, myocardial infarction (heart attack), pulmonary hypertension, and peripheral vascular disease. These diseases, along with arterial vascular injury, can also place undue stress on the kidneys, increasing the risk of chronic kidney disease (CKD), acute kidney injury (AKI), further complications with the regulation of blood pressure, etc. (Middleton JP et al, 2010, Kidney Int). For a more thorough review of the mechanisms of hypertension, please refer to Coffman T, 2011, Nat Med

Although innumerous pharmaceutical and lifestyle modification (diet and exercise) options exist for the effective medical management of hypertension, it is important for scientists and clinicians alike to better understand the mechanisms by which this disease is initiated and the factors that cause or promote progression. 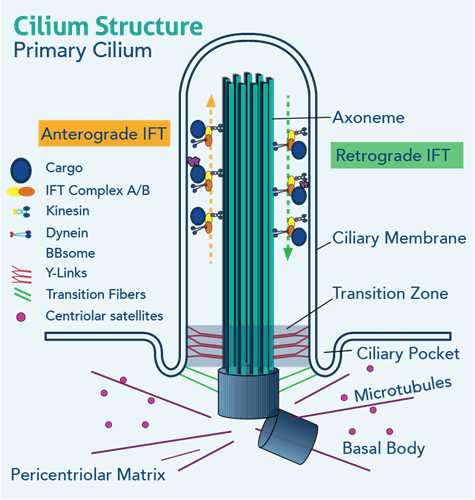 Primary cilia are tiny, highly specialized sensory organelles found in nearly ALL cell types in the human body, as well as in those of other eukaryotic and mammalian tissues/cells. Originally designated as vestigial structures, primary cilia have resurfaced in the molecular biology, genetics, and regenerative medicine research communities as an organelle critical to the development of our organs and tissues (Tasouri & Tucker, 2011), and subsequently, as organelles that are often involved in the pathogenesis of a growing number of diseases/disease states (Christensen, S. T. et al 2007). These diseases include but are not limited to congenital heart disease (CHD; Fitzsimons et al, 2018), cardiovascular disease (Pala, R. et al 2018; Villalobos, E et al 2019), obesity (Snell, W. J. et al 2004), cancer (Sigafoos, A. N et al 2021), osteoarthritis (Coveney C et al 2021), and most recently, as a potential mediator involved in the viral infection of SARS-CoV2 (Lee et al 2020).

Ranging in size from approximately 1 to 3 micrometers in length, the core of the primary cilium contains a unique arrangement of microtubules, which form the structural scaffold for the organelle to extend out from the plasma membrane of the apical portion of the cell. Numerous transmembrane receptors can be found localizing to the primary ciliary axoneme itself or in/around the basal body complex, including but not limited to Notch, Wnt, BMP, and, most notably, the Patched-1 (Ptch1) and Smoothened (Smo) co-receptors responsible for carrying out canonical Hedgehog signaling. It is because of this particular feature that primary cilia are often referred to as “the antenna” of the cell, in reference to their abilities to interpret and respond to changes in extracellular stimuli Pazour, GJ, & Witman, GB, 2003). It is also for this reason that primary cilia retain the capacity to function as mechanosensory and/or chemosensory organelles. However, the breadth and extent to which primary cilia function in each of these sensory capacities appear to vary highly by cell/tissue type (Plotnikova, O et al., 2009).

It’s difficult to imagine how such a minuscule, nonmotile cellular structure could be responsible for something as BIG and critical as the regulation of blood pressure. That said, though small, cilia have been identified as one of the key regulators of both vasodilation and vasoconstriction of the smooth muscle of arterial blood vessels through several different mechanisms—many of which have yet to be fully understood (Nauli SM, et al 2011; Lee et al, 2015).

Under normal/healthy circumstances, primary cilia can be found extending into the vascular lumen from the single-cell layer thick vascular endothelium, the innermost lining of the blood vessel that physically interacts with the flow of blood (Ma N and Zhou J (2020). One of the most well-understood roles for primary cilia in the local regulation of blood pressure is via paracrine signaling initiated by ciliated endothelial cells. For example, increased blood flow to skeletal muscle cells (i.e., during initiation of exercise) increases the amount of fluid shear stress on the vascular endothelium of the arteries/arterioles within the working muscle(s). It is now understood that the endothelial cells of the vascular endothelium are dependent on the primary cilium to sense changes to blood flow (shear stress). In the above example, primary cilia of the vascular endothelium interpret the increase in shear stress and initiate a paracrine signaling cascade to the (also ciliated) smooth muscle cells of the tunica media, the muscular portion of the vessel wall; this results in vasodilation (widening) of the arterial lumen, decreasing blood pressure and therefore increasing perfusion/oxygenation of local, working skeletal muscle.

In a state of disease (e.g., hypertension), the structure, integrity, and capacity of the primary cilium to sense, let alone respond to, changes in fluid shear stress becomes compromised, if not completely attenuated. More specifically, in a sustained and chronic state of high blood pressure (increased fluid shear stress), the primary cilium of endothelial cells becomes damaged and/or is completely disassembled (Iomini, C., et al 2004). Without its primary cilium, the vascular endothelial cell is incapable of communicating signals to the smooth muscle layer of the vascular wall, rendering the vessel less compliant and in severe cases, completely noncompliant (unable to expand or contract in response to changes in blood flow). While there are multiple alternate and compensatory mechanisms through which the blood pressure can be modulated (e.g., central regulation), the sensitivity of the vascular endothelium is entirely critical to many aspects of blood vessel integrity of function. In fact, damage to primary cilia of the vascular endothelium has also been linked to increased risk for the development of atherosclerosis, or the prolonged stiffening of the vascular wall in response to a damaged endothelium, making it vulnerable to pathological inflammatory responses, plaque, and/or thrombus formation (Vion et al 2018; Dinsmore et al 2016).

If you are interested in learning more about cilia and their function in signaling and  heart development, check out this publication by Dr Fitzsimons  et al. (2022, Cells): Hedgehog Morphogens Act as Growth Factors Critical to Pre- and postnatal Cardiac Development and Maturation: How Primary Cilia Mediate Their Signal Transduction

Overview of the Vascular System and the Importance of Endothelial Cells

Imagine the  Rainbow: Multiplexing with Same-Species   Antibodies for Immunofluorescence