DNA is the most central building block of a cell. The human genome harbors the code for about 20,000 proteins and a broad variety of RNA types, which are crucial for the correct structure and functioning of every single cell.

As a blueprint for RNA and proteins, the integrity of DNA is imperative. A cell regularly faces many endogenous and environmental factors that are a potential cause of DNA damage, resulting in aberrant DNA structures and malfunctioning or non-functional proteins.

Unresolved DNA damage can lead to premature aging, degenerative diseases, and tumorigenesis. As most DNA damage repair occurs during or shortly after replication, non-proliferating cells (e.g., myocytes, neurons) are at high risk of accumulating DNA damage. This can reflect in atherosclerosis (1), or neurodegenerative pathologies, e.g., Alzheimer’s disease (2).  Greater life expectancy and modern-day environmental challenges are leading to increased DNA damage and age-related diseases. DNA is continuously subject to a variety of endogenous and exogenous factors that cause damage. It is important to identify and understand the most common DNA damage mechanisms (Figure 1).

Still, due to endogenous by-products during cellular processes, a cell already suffers about 1013 DNA-damaging events per day (4). ROS (reactive oxygen species), for example, are produced during energy generation in the mitochondria. Usually, ROS are converted into less reactive oxygen species by enzymes like superoxide dismutase, catalase, and peroxidase. If the detoxification machinery is not working properly, ROS are the cause of oxidative stress and cell damage.

DNA replication is another endogenous source of DNA damage. It results in inaccurate base insertions into the newly synthesized DNA strand. If the errors aren’t repaired, they will be incorporated into both strands during the next replication cycle, leading to mutations.

DNA damage is also often defined as the introduction of physical abnormalities to the DNA structure; following the underlying molecular mechanism, can be categorized into seven types (Figure 2).

DNA deamination damage seems to accumulate naturally over time. It was shown to be involved in cancerogenesis because of the aging process. Cytosine undergoes hydrolysis, loses an amino group, and as a result changes into Uracil. Uracil-Adenine pairs lead to point mutations (Figure 2; 2A).

Depurination occurs naturally but more frequently due to thermal fluctuations. Most commonly, Adenine or Guanine are removed from the deoxy-sugar backbone due to hydrolysis, resulting in DNA lesions (Figure 2; 2B).

Mismatch bases are a result of replication errors when an incorrect base is incorporated in one of the DNA strands. During the next replication cycle, this strand serves as a template for DNA synthesis, creating a new base pair. The result is a (point) mutation and a change of DNA sequence (Figure 2; 4).

DNA single-strand breaks are the most frequent cause of endogenous DNA damage. SSB can also be the consequence of exposure to UV or to genotoxic agents (e.g., bleomycin) (Figure 2; 5).

Double-strand breaks occur naturally and are essential for meiotic recombination and natural antibody diversity. They become abnormal when occurring due to ROS, ionizing irradiation, genotoxic agents, or due to unresolved SSB during replication. Even if repaired, they can lead to genomic mutations or deletions. Phosphorylation of Histone H2AX and p53 is crucial for activation of DSB repair pathways and are therefore sensitive and reliable markers for DSB detection (Figure 2; 6). 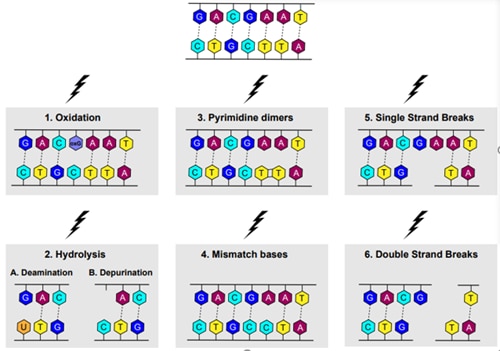 Figure 2. The variety of DNA damage at the molecular level.

Cells have three possible ways of responding to DNA damage:

If the DNA damage is too severe for repair, or errors are resolved insufficiently, a cell can enter senescence (a state of irreversible cell cycle arrest that is associated with aging), or initiate apoptosis (programmed cell death) as a last resort to avoid further organism damage.

Most DNA damage can be repaired. DNA Damage Repair has important implications in preventing cells from premature aging as well as in the development of malignancy due to the accumulation of mutations. The great importance of research on the topic of DNA Damage Repair was emphasized by the Nobel Prize in Chemistry 2015, which was awarded to Tomas Lindahl, Paul Modrich, and Aziz Sancar for their work on DNA damage repair pathways at a molecular level and their role in cell survival.