Genome editing is understood as permanent modifications of DNA content at a specific genomic site. Previously, it was carried out by delivering a DNA template with a long homologous arm to the targeted genomic site. Integration into the genome was based on a homologous recombination process, where host nucleases repair the DNA break using a homologous DNA template. Because the repair template also contained a selection marker, antibiotic selection was used to detect genomically altered cells carrying the desired mutations.

This process was time-consuming and required synthesis and the delivery of a long DNA template. It was not efficient in many mammalian cell types and required multiple steps, including the removal of the genomically integrated selection cassette after the selection. There are three different editing nucleases currently available: ZFNs, TALENs, and CRISPR-Cas9.

The era of nucleases in genome editing

The real breakthrough in genome engineering came with the design of nucleases that were able to specifically recognize and cleave target DNA (Table 1).

-          The first endonucleases were zinc finger nucleases (ZFNs). These are based on zinc finger proteins, a family of naturally occurring transcription factors, fused on an endonuclease FokI1.

Zinc finger domains can recognize a trinucleotide DNA sequence. A series of linked zinc finger domains can, therefore, recognize longer DNA sequences, providing desired on-target specificity. However, zinc finger motifs aligned in an array influence the specificity of neighboring zinc fingers, making the design and selection of modified zinc finger arrays more challenging and more time-consuming. It is hard to predict the specificity of the final arrangement. FokI endonuclease works as a dimer, which means that the double-strand DNA cleavage occurs only at sites of binding of two ZFNs to the opposite DNA strands (Figure 1A). The system is based on two ZFNs engineered to recognize different closely located nucleotide sequences within the target site and requires the simultaneous recognition and binding of both ZFNs, which naturally limits off-target effects.

Similarly to ZFNs, target specificity comes from the protein-DNA association. In the case of TALENs, a single TALE motif recognizes one nucleotide and an array of TALEs can associate with a longer sequence (Figure 1B). The activity of each TALE domain is restricted only to one nucleotide and does not affect the binding specificity of neighboring TALEs, making the engineering of TALENs much easier than ZFNs. Similarly to ZFNs, TALE motifs are linked with FokI endonuclease, which requires dimerization for the cleavage to occur. This means that the binding of two different TALENs at opposite strands in close vicinity to the target DNA is needed.

-          The CRISPR-Cas9 (clustered regularly interspaced short palindromic repeats) system is based on the bacterial immune system.

It is composed of Cas9 nuclease and two types of RNAs: trans-activating crRNA (tracrRNA) and a single guide RNA (sgRNA) that recognizes the target sequence by standard Watson-Crick base pairing. It has to be followed by a DNA motif called a protospacer adjacent motif (PAM). Each Cas9 protein has a specific PAM sequence,3,4 e.g., for standard Cas9 it is 5’-NGG-3’. DNA cleavage is performed by Cas9 nuclease and can lead to a double-strand break in the case of a wild-type enzyme, or to a single-strand break when using mutant Cas9 variants called nickases (Figure 1C). Recognition of the DNA site in the CRISPR-Cas9 system is controlled by RNA–DNA interactions. This offers many advantages over ZFNs and TALENs, including easy design for any genomic targets, easy prediction regarding off-target sites, and the possibility of modifying several genomic sites simultaneously (multiplexing).

The design of editing nucleases in a way that reduces off-target effects was a major issue not only for the basic science approach but also for their putative clinical and industrial use.

The delivery of ZFNs and TALENs, either in vivo or in vitro, can lead to toxicity or lethality due to binding at off-target sites and the induction of undesired DNA cleavage. Mutations in FokI in the case of ZFNs and TALENs were introduced to promote FokI endonuclease activity only during heterodimerization events at sites bound by two discrete nucleases6,7. Off-target cleavage of CRISPR-Cas9 systems mostly comes from the recognition of fully or partially complementary genomic sites by sgRNAs8. Various approaches have been suggested to limit off-target cleavage, including limiting the amount and time of active Cas9 protein in cells by selective delivery methods or by altering Cas9 half-time9. A number of Cas9 variants with lower off-target specificity have been developed, including HF-Cas9, eCas9, and HypaCas910–12. New variants of Cas9 and Cas9 homologs, such as CRISPR-Cas12 (Cpf1) and CRISPR-Cas13a (C2c2), can recognize different PAMs, not only significantly increasing options for precision genome editing, but also potentially having higher on-target specificity13. An interesting alternative is a Cas9 fusion with FokI nuclease, which combines the advantages of ZFNs/TALENs and the CRISPR-Cas9 system13,14.

Cas9 chimeras as novel research tools – not only for DNA cleavage

Various Cas9 chimeras, including loss-of-function and gain-of-function studies, have recently been developed15. The presence of Cas9 allows genomic targeting, while the fused additional proteins can modulate Cas9 activity.

In “CRISPR interference” (CRISPRi), a Cas9 protein fusion to a repressive KRAB effector domain allows downregulation of gene expression by transcriptional repression16. This approach provides an advantage over standard RNA interference (RNAi) techniques and allows for investigation of the function of non-protein coding genes. Additionally, the opposite approach (CRISPR activation, CRISPRa) is possible; Cas9 fusion with transcriptional activation domains (e.g., VP64) leads to increased expression of the desired genomic loci. Additional activation of transcription can be achieved with synergistic activation mediator (SAM), where the Cas9 fusion contains several activation domains to maximize activation efficiency17. Some Cas9 chimeras do not possess nuclease activity. For example, Cas9 fusions with chromatin-modifying enzymes are used in epigenome studies to visualize protein-DNA binding sites, to examine chromatin structure, or for histones post-translational modification research18,19.

CRISPR-Cas9 can also serve as a reliable tool in cell line engineering. This approach requires the delivery of Cas9 protein, tracrRNA, and site-specific sgRNA. Cas9 creates a site-specific DNA break that is repaired by host DNA repair machinery. In the absence of a repair template it can lead to truncations resulting in null mutations. A more targeted approach is available by introducing repair templates containing the desired mutation (Figure 2B). 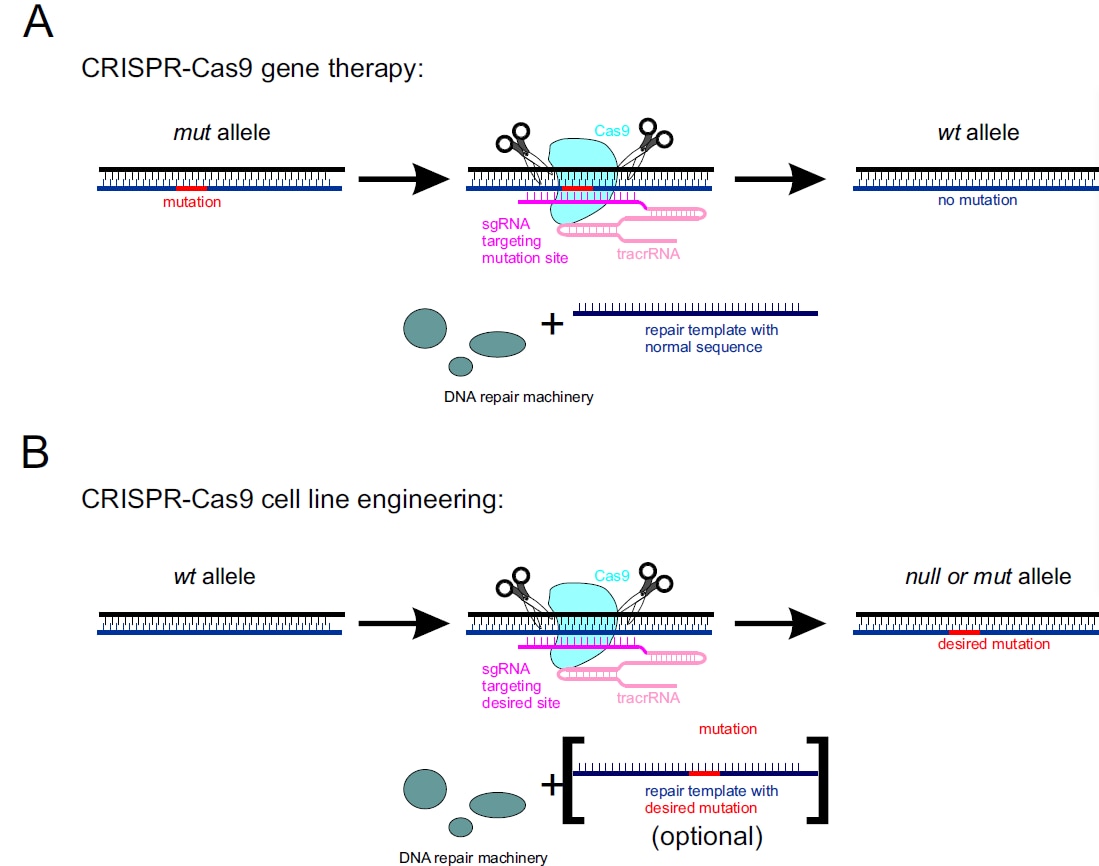 Figure 2. Use of the CRISPR-Cas9 system in A) gene therapy, and B) cell line engineering.

Editing nucleases have revolutionized genomic engineering, allowing easy editing of the mammalian genome. They are commonly used not only in basic research but also in pre-clinical and clinical studies as a potential mechanism to reverse DNA-based disease-causing mutations in inherited genetic diseases. Non-commercial and commercial innovations have allowed continuous development of technologies that started only 20 years ago, and they will be even more widely used in the future in advancing science and biomedicine.