The “Heart” of Science

Aging is an inevitable part of life and unfortunately poses the largest risk factor for cardiovascular disease.The heart undergoes continual remodelling in response to fluctuations in functional demand. Autophagy also plays a critical role in cell homeostasis, which is reflected in myocardial aging changes. There are several key genes that are involved in the regulation of cardiovascular health, including sirtuins, AMP-activated protein kinase, mammalian target of rapamycin, and insulin-like growth factor 1 (Figure 1).

Pathological hemodynamic overloading (e.g., hypertension and myocardial infarction) and unloading (e.g., prolonged bed rest and ventricular assist device) induce a broad spectrum of cardiovascular diseases (CVDs). In 2012, the WHO highlighted that more than 30% of the global population die because of CVDs (with the majority due to coronary heart disease and stroke). Smoking, chronic stress, high blood pressure, and diabetes are the most common factors for cardiovascular disease.

At present we have new capabilities and resources that can help to study the heart and its mechanism. 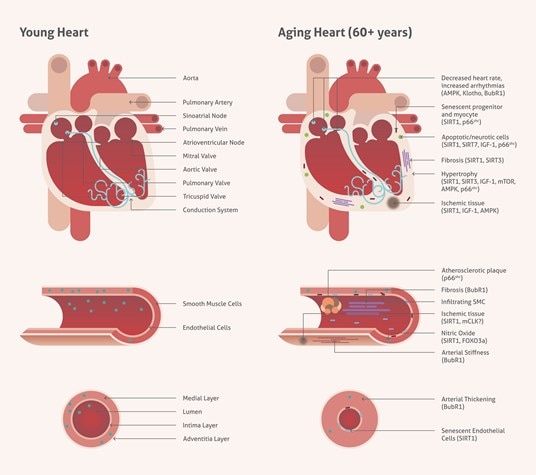 One of the latest discoveries relates to new genes associated with high blood pressure (hypertension) (1). Hypertension is a leading cause of heart disease, stroke, and death worldwide. The main factors contributing to hypertension are genetics and lifestyle factors such as diet, weight, alcohol consumption, and exercise. Scientists have found that high expression levels of 107 new gene regions in cardiovascular tissue or blood vessels can identify at-risk patients. Researchers tested over 9.8 million genetic variants from 420,000 UK Biobank participants and cross-referenced these with their blood pressure data. By using genetic tests, doctors can tailor proper treatment for individual patients.

iPSC-derived cardiomyocytes and their markers panel

Scientists are already able to generate mature and viable heart muscle from human or animal stem cells and implant them to newborn animals (3). Stem cells grown in lab dishes are not able to turn on genes needed for maturation, but growing them in a live animal enables the differentiation into cardiomyocytes. In this case, the hearts of host animals supply the biological signals and chemistry needed by the implanted immature heart muscle cells to progress and overcome the developmental blockade that traditionally stops their growth in laboratory conditions.

Since the heart cannot regenerate muscle tissue after a heart attack, part of the muscle wall is killed. The dead tissue can strain the surrounding muscle, leading to lethal heart enlargement. Researchers have grown heart tissue by seeding a mix of human cells onto a 1-micron-resolution scaffold made with a 3-D printer (4). The cells organized themselves in the scaffold to create engineered heart tissue that began beating within one day of seeding, and the speed and strength of contractions increased significantly over the next week (5). When the human-derived heart muscle patch was surgically placed into a mouse heart after a heart attack, it significantly improved heart function and decreased the amount of dead heart tissue.

New scientific discoveries will give us an ability to further improve the current state of the modeling of heart disease and heart repair. A future challenge will be to adapt these discoveries to advance new patient treatments.