The importance of blocking when using Nano-Secondary reagents for IF

Blocking is an essential step during the preparation of a sample for immunofluorescence detection. Blocking improves the sensitivity by reducing nonspecific background and therefore increases image quality. Insufficient blocking results in higher background noise and over-blocking can even mask the specific signal.

The aim of blocking is to prevent non-specific interactions of the primary and secondary antibody by covering reactive sites of the sample. In theory any protein that does not bind to the target antigen can be used as blocking reagent. In fact, sera blocking solutions and protein blocking buffers are commonly used. 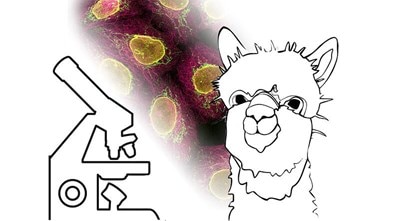 Serum contains a lot of proteins, which block non-specific epitopes in the sample. In addition, sera carry antibodies that will bind to Fc receptors of the sample tissue and prevent primary and secondary antibodies from doing the same.

Example: if you use a primary antibody from mouse and your secondary antibody was produced in goat, goat serum would be most suitable for blocking.

Protein blocking solutions consist of highly concentrated proteins like BSA, Casein or skimmed milk / nonfat dry milk in buffer. The proteins will outcompete for the non-specific binding to the sample with the primary and secondary antibodies.

Blocking with proteins is an inexpensive method. Additionally, protein blocking works well when secondaries from different species are used for immunofluorescence multiplexing.

Although many labs follow established blocking protocols and blocking buffers, blocking should be optimized for each experiment. No single blocking solution works best for all samples, and empirical testing is critical to obtain the best possible results for a given combination of specific antibodies and sample composition.

How to choose the best secondary antibody for your application