Though dye fluorescence is most commonly assayed in flow cytometry, valuable information can be determined from the autofluorescence levels of unstained cells. Cells are naturally autofluorescent, especially at lower wavelengths of the visible spectrum, and the scattered light can provide information on the cell size, granularity, surface topography, and nuclear: cytoplasmic ratio. For instance, an analysis of white blood cells allows identification of different leukocyte types.

However, the vast majority of flow cytometry experiments involve the use of fluorochromes. These are small organic molecules or proteins such as allophycocyanin (APC) with fluorescent properties. Fluorochromes are often conjugated to primary or secondary antibodies to mark targets or biomarkers. An alternative to antibody staining is to use cells expressing, either stably or transiently, proteins of interest fused with fluorescent proteins such as GFP, Venus, or mRFP.

Single dye organic fluorophores such as FITC, APC, PE, and PerCP have been around for many years. More recently, synthetic dyes such as Alexa Fluor™[1] and CoraLite have been designed with enhanced brightness and greater photostability. Tandem dyes are also available and commonly used in flow cytometry, whereby two fluorophores are covalently coupled together. When the first dye (donor) is excited, it transfers energy to the second dye (acceptor), which then becomes activated, resulting in fluorescence. Thus, tandem dyes enable more colors to be detected from a single laser wavelength.

Table 1. Excitation-emission details of common fluorophores and their relative brightness. 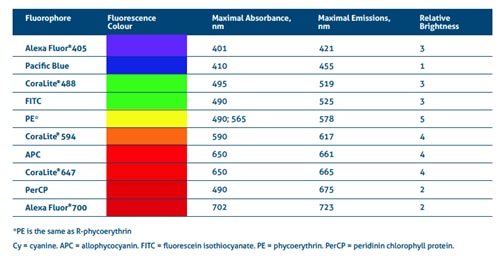 [1] Alexa Fluor is a registered trademark of Thermo Fischer Scientific.

Points of note when choosing a fluorophore