How to conduct a Co-immunoprecipitation (Co-IP)

Co-IP describes the immunoprecipitation of a protein of interest and its interacting partners.

Immunoprecipitation (IP) is a technique used to isolate a protein from of an extract using a Nanobody or antibody (Ab). In co-immunoprecipitation (Co-IP), besides the IP of a specific protein, its interaction partner(s) are also pulled down and analyzed. In Co-IP, the protein that is pulled down is called the “bait” protein, while the interaction partner is called the “prey”. In Co-IP, the bait is directly precipitated with a Nanobody or Ab, which is coupled to (magnetic) beads. The prey is indirectly precipitated together with the bait. Therefore, Co-IP is used to enrich and/or identify interaction partners of the bait protein.

In the following blog, we focus on the precipitation of a GFP-tagged bait and its interacting prey protein. The Co-IP is conducted with GFP-Trap® comprising an anti-GFP Nanobody conjugated to beads. However, the principles described in this blog also apply to tags other than GFP or for Co-IPs using conventional antibodies. 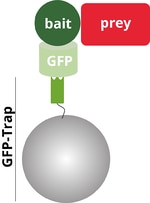 The GFP-bait is a fusion protein of GFP (light green) and bait protein (dark green). The bait interacts with the prey protein (red). During Co-IP binds the added GFP-Trap® to the GFP bait..

A Co-IP consists of 5 steps.

The typical steps of a Co-IP are:

1. Preparation of the cell lysate

The preparation method of the cell lysate depends on the organism and bait and prey protein.

2. Binding of the bait and prey by GFP-Trap®

GFP-Trap® is added to the cell lysate and incubated for 1 h at +4°C. 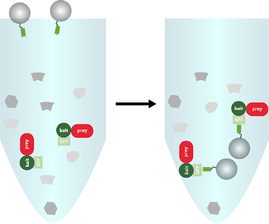 3. Washing off unbound molecules, prey should remain bound to bait

The beads are washed a few times to remove unbound molecules while the prey protein should remain bound to the bait protein.

4. Elution of bound bait and prey from the beads

Bait and prey protein are released from the beads using SDS-sample buffer or acidic elution buffer.

5. Analysis of bait and prey on SDS-PAGE, Western blot, or by mass spectrometry

The eluate containing the bait and prey proteins is analyzed by SDS-PAGE, Western blot (WB) or mass spectrometry (MS). 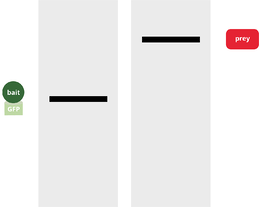 Controls are crucial for a successful Co-IP experiment

Controls are an essential part of any Co-IP experiments – they are very important for the interpretation of your results and can help you to identify potential problems. In our Co-IP example, three different components should be analyzed: the bait-GFP, prey, and GFP only. Please note that a loading control is also often analyzed in addition, e.g., GAPDH, which is not shown here. In a comprehensive Co-IP experiment, different combinations of the components are usually examined to avoid false positive and false negative results.

The positive control consists of a pulldown of the GFP-bait protein and GFP protein in the absence of the prey protein. GFP-bait and GFP are supposed to be found in the input and bound (IP:GFP) fractions. This experiment is conducted to confirm that the immunoprecipitation of the GFP-bait protein works under the chosen conditions, which is a pre-requisite of every Co-IP.

If the positive control and negative control experiments show the expected results, the final Co-IP experiment can be conducted. In the final experiment, both the GFP-tagged bait and prey protein are incubated together in the input. If the prey and GFP-bait are both found in the bound fraction, it can be concluded that the prey is only precipitated if the bait protein is present. This experiment, along with the positive and negative controls, demonstrates that the prey and bait proteins interact with each other.

A complete Co-IP experiment consists of all three parts. In publications, typical Co-IP data looks like this:

How to immunoprecipitate Flag®-tagged proteins

Advantages and limitations of different antibody formats in immunoprecipitation

Which beads should I use for my immunoprecipitation?

How to obtain a low background in immunoprecipitation assays