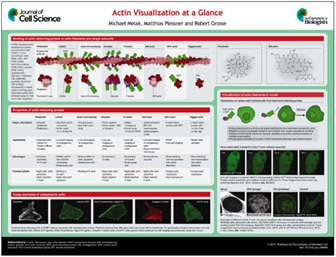 Robert Grosse and his team from the Institute of Pharmacology at the Biochemical-Pharmacological Center (BPC), University of Marburg, Germany took the effort and systematically looked into detection technologies of actin filaments in order to avoid potential pitfalls. In the recently published mini review/poster “Actin Visualization at a Glance” (Melak et al. 2017) they have discussed the pros and cons of current probes to visualize actin filaments, i.e. Phalloidin, LifeAct, Utrophin, F-tractin, SiR-actin, GFP-actin, tagged actin, and  Actin Chromobody®  (see table 1 and figure 1 below).  Grosse’s lab considers only the Actin Chromobody to have minimal effect on actin dynamics. All other presented probes are suspected to alter actin dynamics. Obviously genetic constructs, i.e. actin fusion proteins don’t disturb actin dynamics neither, but have other disadvantages. Hence, if actin probes are used, which do actually interfere with polymerization and depolymerization of the actin skeleton, they should be handled with great care

Adopted and modified from Melak et al. (2017). Product names may be covered by registered trademarks of corresponding corporations.

The Actin Chromobody is an intracellular anti-actin single chain antibody (VHH or so-called “nanobody” from alpaca), which is genetically fused to green or red fluorescent proteins, for real time analysis of endogenous actin in live cells. Carefully balanced on and off rates of this internal anti-actin VHH, its binding and dissociation from the actin epitope, prevent from interfering with actin dynamics. These make the Actin Chromobody an ideal tool for live cell imaging respectively in vivo analysis of endogenous proteins, i.e. actin.

Visualize the onset of metastasis with Chromobodies