What is the difference between necrosis and apoptosis?

Understand the differences between regulated and unregulated cell death.

Cell death is a naturally occurring phenomenon in multicellular organisms and cells can die as a result of internal and external stimuli. Cell death can be broadly classified into regulated cell death (RCD) and unregulated cell death a.k.a. accidental cell death (ACD). While ACD is a disordered process resulting from an unexpected attack or injury, RCD proceeds through precise signaling pathways which result in defined biochemical and functional outcomes. Apoptosis is the earliest discovered and the most extensively studied RCD pathway. Several non-apoptotic RCD pathways including pyroptosis, ferroptosis and necroptosis have gained significant attention in recent years due to their potential in cancer therapy and their involvement in the pathogenesis of multiple diseases. Here we will discuss the key features of apoptosis and the most common form of ACD termed necrosis while highlighting the key difference between the two cell death pathways, and taking a closer look at necroptosis, a regulated form of necrosis. 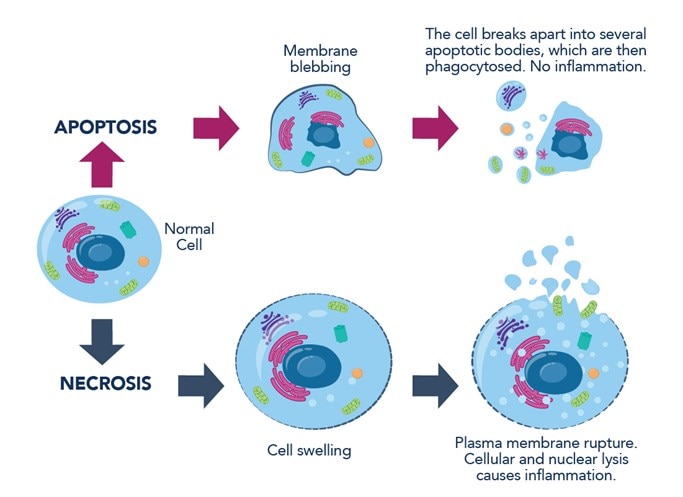 Figure 1: Hallmarks of apoptosis and necrosis.

Apoptosis is a classical form of RCD pathway that plays a critical role in both normal physiological as well as pathological processes. It can be triggered via various physical, chemical, and biological factors, and its cellular response is tightly regulated. The controlled degradation of cellular components that occurs during apoptosis is regulated by caspases, which are a family of proteases activated during apoptosis (more details here: Caspase family).

There are two main receptor types for externally induced apoptosis. Death receptors (e.g., TNF, Fas receptors) bind their extracellular ligands (TNF-alpha, FasL – Fas ligand, respectively). This prompts their activation and assembly into complexes, leading to the activation of intracellular caspases. The other apoptotic receptors are called dependence receptors (e.g., DCC and PTCH1), which work on a completely opposite sensing mechanism. In physiological conditions, they respond to trophic factors and act as an anti-apoptotic stimulus. However, when their ligand falls below a certain level in the extracellular space, ligand-free receptors trigger the apoptotic response. 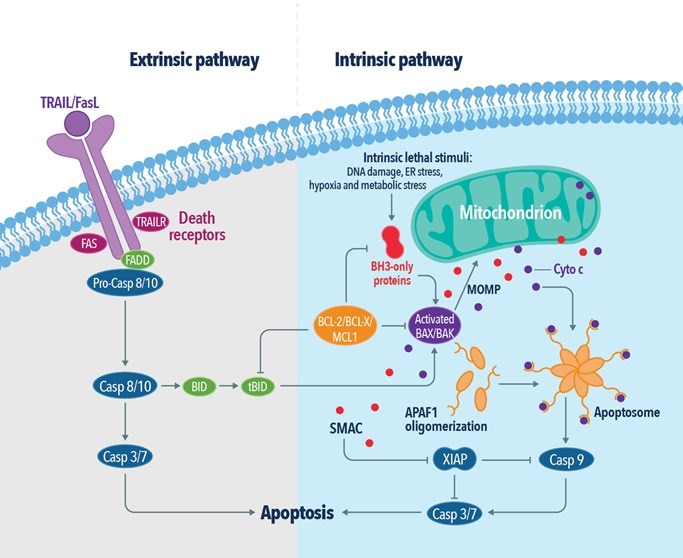 Figure 2: The extrinsic and intrinsic pathways of apoptosis.

Apoptosis is characterized by a series highly regulated biochemical events that lead to significant changes in cellular morphology and ultimately cell death (Table 1). In the earlier phases, a cell undergoing apoptosis loses cell contacts and changes shape. Chromatin condenses in the nucleus and moves toward the nuclear envelope. Condensation of the nucleus (pyknosis) initiates DNA degradation. Loss of water results in significant cell shrinkage and blebbing of the plasma membrane with little or no morphological changes to the other cellular organelles. Phosphatidylserine, a lipid present only in the inner layer of the plasma membrane, is now also visible in the outer layer. Nucleus and cytoplasm fragment into apoptotic bodies. Released cellular proteases lead to disintegration of the cellular skeleton, membranes, and proteins. Neighboring macrophages recognize, engulf, and digest apoptotic bodies, completing the process.

Necrosis is a form of ACD resulting from internal or external stresses such as mechanistic injuries, chemical agents, or pathogens. The process is usually rapid and leads to cell swelling (oncosis) and bursting due to loss of osmotic pressure (Table 1).

During necrosis, the loss of plasma membrane integrity induces cellular contents to escape to the extracellular space, causing inflammatory responses. Cell disintegration is preceded by a series of morphological changes, including disruption of cell organelles, such as swelling of the ER and mitochondria, or decay of the Golgi apparatus. An influx of calcium ions from the extracellular matrix activates intracellular nucleases that fragment DNA. Freed lysosomal hydrolases contribute to the degradation of nucleic acids and proteins. Decay products activate leukocytes, lymphocytes, and macrophages that phagocytose the remnants of dead cells.

While necrosis was considered to be strictly an unregulated form of cell death previously, recent studies have identified a regulated form of cell death with necrotic phenotype, termed necroptosis. It arises in response to various stress stimuli including interferons, death ligands, or Toll-like receptors. Necroptosis is highly immunogenic in nature and is often utilized by host cells as a defense mechanism against pathogens. Moreover, since the necroptotic pathway does not rely on caspase activation, it is activated as an alternative form of RCD when the apoptotic pathway is inhibited by certain factors such as viral proteins or genetic defects.

Of the above-mentioned factors, necroptosis mediated by TNFα and its receptor TNFR1 is the most well-characterized pathway. In this pathway, binding of TNFα to TNFR leads to the assembly of a multimeric protein complex consisting of TRADD, TRAF2/5, cIAP, and RIP1. RIP1 plays a critical role in determining cell fate by committing cells to either cell survival or cell death pathways. While polyubiquitination of RIP1 by cIAP1/2 activates the NF-κB cell survival pathway, inhibition of RIP1 ubiquitination leads to the activation of either apoptotic or necroptotic cell death pathways. The association of RIP1 with FADD and procaspase-8 results in apoptotic cell death by caspase-8 activation and subsequent RIP1 cleavage. In the absence of caspase-8 activation, RIP1 associates with RIP3 to form the necrosome. The necrosome then phosphorylates MLKL leading to its oligomerization and subsequent insertion into the plasma membrane. Membrane insertion of MLKL results in cell rupture and the release of inflammatory molecules such as DAMPs into the extracellular space. 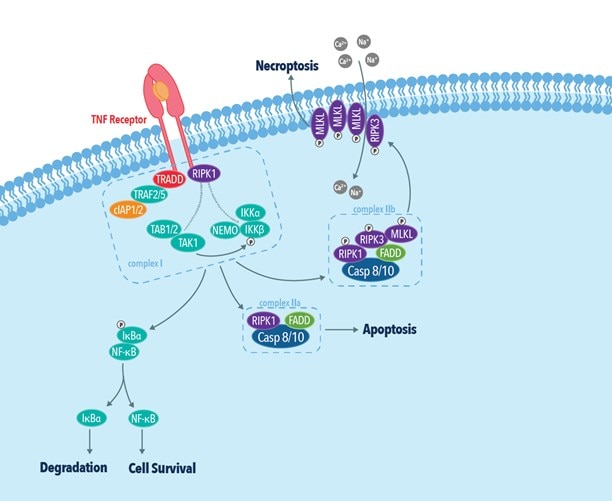 Apoptosis is a form of programmed cell death that can be initiated by a number of internal and external routes; it is a well-controlled process that results in the slow turnover of cell remnants and phagocytosis by neighboring macrophages. In contrast, necrosis is caused by external factors that lead to irreversible cell injury, with loss of plasma membrane integrity and rapid death often resulting in activation of the immune system.

Apoptosis is a critical component of several normal physiological processes including embryonic development, tissue homeostasis, immune response, and aging and is therefore non-inflammatory in nature. Dysregulation of the apoptotic pathway however has been associated with multiple pathological conditions including neurodegenerative diseases, ischemia, cancer, and autoimmune disorders. Necrosis, on the other hand is typically not seen under normal physiological conditions but is triggered in response to extreme physical or chemical cellular injury leading to inflammation. Inhibition of apoptotis by certain factors leads to the activation of necroptosis, a regulated form of necrotic cell death.

How do I know if the antibody will cross-react?

How to write a good scientific abstract?