The human immune system contains a collection of different cell types and molecules that help to protect the body from toxins, viral infections, bacteria, and parasites. Although immunology covers all aspects of this complex network, the field is united by the immune cell. The central points of immunology are: understanding, identifying, and distinguishing the many different immune cells that are essential for diagnosis and therapy. Cell markers are helpful tools used to identify a specific immune cell population. This catalog offers a detailed choice of the most commonly used cell markers and an extensive selection of antibodies used in immunology.

B cells (bursal or bone marrow-derived cells) are lymphocytes that play a pivotal role in the adaptive immune system and disruption of B cell function is a common hallmark of many different diseases. B cells are produced in the bone marrow and migrate to the spleen and other secondary lymphoid tissues for maturation. B cells go through several stages of development during exposure to antigens.

Maturation Of Human B Cells 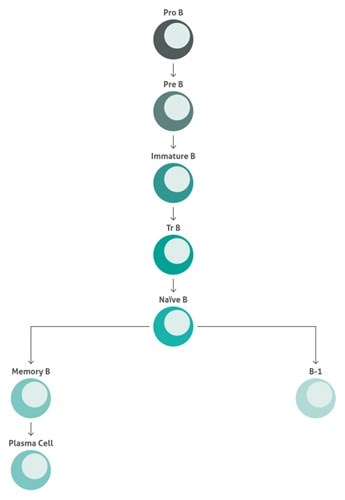 CD20 is a B-lymphocyte surface molecule that is widely expressed during B-cell ontogeny, from early pre-B-cell developmental stages until final differentiation into plasma cells. It is involved in the regulation of B-cell activation and proliferation. CD20 also serves as a useful target for antibody-mediated therapeutic depletion of B cells.

Macrophages (and their precursor cells, monocytes) are important cells of the immune system. Upon infection or tissue damage, monocytes, one of the major groups of white blood cells, rapidly differentiate into macrophages. Macrophages are large, specialized cells that are present in every tissue of the body. They recognize and consequently destroy the target cell. Macrophages provide a first line of defense in protecting the host from infection.

Basophils are a small subgroup of granulocytes. Basophils are mainly involved in defense against parasites and in response to allergic reactions. Basophils contain several surface molecules, the most representative of which are listed below.

Eosinophils, like all other granulocyte forms, destroy parasites. Besides this, eosinophils are proinflammatory cells (that are) able to produce and release toxic proteins. Hence, eosinophils are also involved in allergic reactions

Neutrophils are the most common granulocyte cell type found in the blood system. They display the first defense mechanism to bacterial infection or other acute inflammations. Some markers are mentioned below.

Dendritic cells (DC) are potent antigen-presenting cells that are important for the induction of the primary immune response, including induction of T cell responses, migration, or antigen capture. Dendritic cells are found in different tissues and immature forms are also found in the blood. They differentiate and become active in different tissues to take up and process the antigen. In general, activated dendritic cells move to the lymph tissue to interact with T or B cells.

Mast cells are a type of leukocyte. They are best known for their role in mediating allergic diseases and autoimmunity. However, they also play an important role in defending against pathogens. Mast cells are found in most tissues of the body, especially in areas that are in contact with the external environment such as the skin or intestine. In their immature form, mast cells circulate in the blood. Mast cells contain several inflammatory factors, lipid mediators, and many more factors. Upon stimulation, they degranulate and release different mediators, which in turn modulates the host’s innate immune system.

Adhesion with HA plays an important role in cell migration and tumor growth. CD44 is also involved in lymphocyte activation, recirculation and homing, and in hematopoiesis.

Natural killer (NK) cells are lymphocytes that are essential in the innate immune system. They are important especially for the destruction of cells infected by a virus or of tumor cells. NK cells kill infected cells by releasing small cytoplasmic granules that trigger cell death (apoptosis).

The pre-NK cell gets activated in response to, e.g., IL-2, IL-12, IL-15, or IL-18. The NK cell then produces and secretes several cytokines, chemokines, and cell death-inducing proteins. 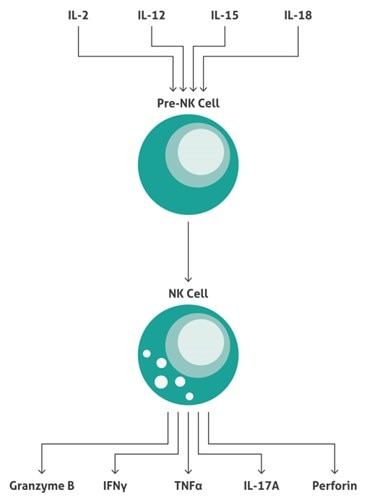 Erythrocytes (also known as red blood cells) are the most common cell type in the blood system. They are essential for the delivery of oxygen from the lungs to body tissue. Mature erythrocytes do not have a nucleus and lack most organelles. They are of flexible shape, thus flowing easily through the blood circulation.

Myeloid-derived suppressor cells (MDSCs) form a very heterogeneous cell population. MDSCs are of great interest as they expand during cancer, inflammation, or infection. In addition, they have not only the ability to secrete immunosuppressive cytokines that regulate T cell function, but they also have the capacity to suppress the cytotoxic effects of natural killer cells.