Western Blot Troubleshooting: Why Does The Observed Protein Molecular Weight (MW) Differ From The Calculated One?

The first WB step is sodium dodecyl sulfate–polyacrylamide gel electrophoresis (SDS-PAGE), followed by protein transfer on a membrane and subsequent detection with specific antibodies. Because the SDS-PAGE is conducted in denaturing conditions, proteins migrate according to their molecular weights irrespective of their secondary/tertiary structure, charge or protein–protein interactions. This means that smaller proteins migrate faster than larger ones.

The predicted molecular weight (MW) of the protein is the sum of the molecular weights of all protein amino acids. It is easy to calculate, e.g., using the free online ExPASy tool. Often the calculated MW is different from that observed on the WB. Here we try to summarize the most common reasons for why this may occur (Figure 1). 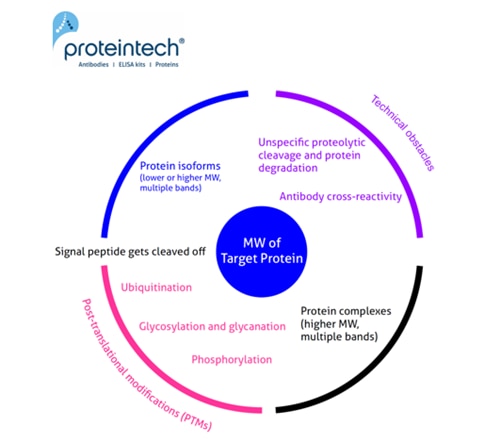 1. Signal peptide (and a pro-peptide) gets cleaved off

Many proteins that undergo transport through the secretory pathway have signal peptides of 15–35 aa. length located predominantly at their N-termini. They are often cleaved by various proteases during their subcellular transport. This results in the mature protein running at a lower than predicted molecular weight. The presence of signal peptides can be predicted by various online tools or based on previously published data. They are usually well annotated in protein databases, e.g., UniProt. Additionally, a subset of proteins has pro-peptides – protein domains that are present in protein precursors. Protein precursors need to be processed by proteases in order to engender a functional product (without pro-peptide). Figure 2: PINK1 (23274-1-AP) is a mitochondrial serine/threonine-protein kinase that protects cells from stress-induced mitochondrial dysfunction. The precursor of PINK1 (65 kDa) is synthesized in the cytosol and is imported into the outer membrane of mitochondria. PINK1 is further transferred into the inner membrane where it is cleaved into a 52 kDa mature form.

Caspases, a family of endoproteases, are critical players in cell regulatory networks controlling inflammation and cell death. Caspase 3 (19677-1-AP) exists as an inactive proenzyme form of 32 kDa (p32), which upon apoptotic signaling gets cleaved into two active subunits (p19/17 and p12) that assemble into a functional tetrameric enzyme (PMID: 7596430).

Proteins of the matrix metalloproteinase (MMP) family are involved in the breakdown of the extracellular matrix in many physiological processes, including embryonic development, reproduction, tissue remodeling, and disease processes such as arthritis or metastasis. Most MMPs are secreted as inactive proproteins that are activated when cleaved by extracellular proteinases. The inactive pro-MMP9 (10375-2-AP) is 92 kDa. It gets sequentially cleaved by MMP3 into a processed form of 68 kDa through an intermediate form – 78/82 kDa (PMID: 1371271). Besides, MMP9 can also exist as a dimer of 180 kDa (PMID: 7492685). Figure 3: Programmed cell death ligand 1 (PD-L1, CD274, or B7-H1) (66248-1-Ig) is a type I transmembrane protein, acting as a key regulator of the adaptive immune response. Full-length PD-L1 MW is 33 kDa. The signal peptide is cleaved off during protein transport to the plasma membrane and the protein is heavily N-glycosylated with an apparent molecular weight of 45–70 kDa with the major glycosylated form of 45–50 kDa (PMID: 27572267).

Please note: An enzymatic deglycosylation is a commonly used experimental technique to verify whether a studied protein is glycosylated. Prior to WB, the protein sample is incubated with an enzyme that is able to remove parts or full glycan chains. WB protein species from the digested sample are then compared with the undigested sample, and any observed shift in molecular weight indicates protein glycosylation. One commonly used enzyme is PNGase F; it removes N-linked glycans by cleaving the bond between the innermost N-Acetylglucosamine of the glycan chain and the asparagine residue.

Proteoglycans are a special case group of glycoproteins. They are extracellular matrix proteins with long unbranched glycosaminoglycan chains covalently attached to the amino peptide chain core. Usually, the molecular weight of the sugar group is even larger than the protein component. 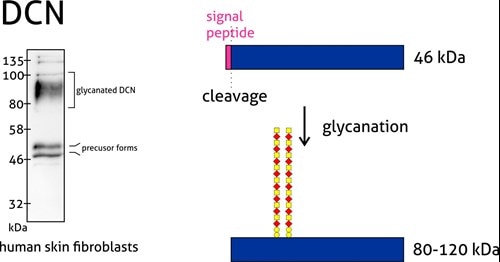 Figure 4: Decorin (14667-1-AP) is a member of the small leucine-rich proteoglycan family of proteins. Decorin precursor forms a range of 43–47 kDa MW. It contains a cleavable N-terminal peptide signal and can also be glycosylated. The attachment of glycosaminoglycans (chondroitin sulfate or dermatan sulfate) to decorin occurs in the Golgi apparatus prior to secretion of the mature glycanted form from cells.

One of the most common posttranslational modifications is protein phosphorylation. It takes place on serine, threonine, and tyrosine residues. Phosphorylation regulates protein function, its enzymatic activity, protein–protein interactions, and protein localization. Phosphorylation is catalyzed by phosphatases and can be reversible – phosphorylated proteins can be dephosphorylated by protein dephosphatases. The addition of a single phosphoryl group adds +/- 1 kDa to the MW, which is often beyond the resolution of the standard SDS-PAGE. However, multiple phosphorylation sites can lead to more prominent MW changes. 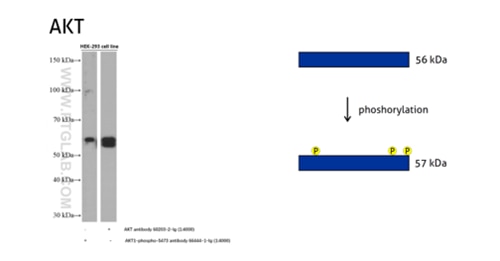 Figure 5: The serine/threonine-protein kinase AKT plays a role in many cellular processes. Survival factors can suppress apoptosis in a transcription-independent manner by activating the serine/threonine kinase AKT1, which then phosphorylates and inactivates components of the apoptotic machinery. (60203-2-Ig detects all the AKT members with or without phosphorylation, 66444-1-Ig detects the phospho-Ser473 of AKT1 and phospho-S474 of AKT2/phospho-Ser472 of AKT3.) 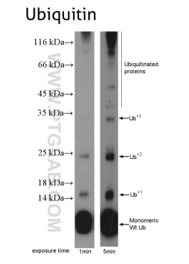 WB SDS-PAGE is performed in reducing conditions. That means that the majority of the protein complexes composed of proteins linked via non-covalent bonds disassociates during sample preparation and electrophoresis, and  (individual) proteins run as monomers. However, some proteins remain partially or fully present in homo- or hetero-meric complexes, even in the presence of SDS and β-Mercaptoethanol. In this case, their observed molecular weight can be substantially higher than the predicted, calculated monomeric form. Some proteins, especially transmembrane proteins and proteins with hydrophobic domains, can aggregate during cell lysis as they are released from their native protein complexes and lipid membranes. These aggregates have high molecular weights and may not represent interactions that occur in their native states.

Please note: 20% β-Mercaptoethanol (or 100 mM DTT) for the 4X SDS sample buffer might help to remove unspecific bands due to dissociation of the protein complex. 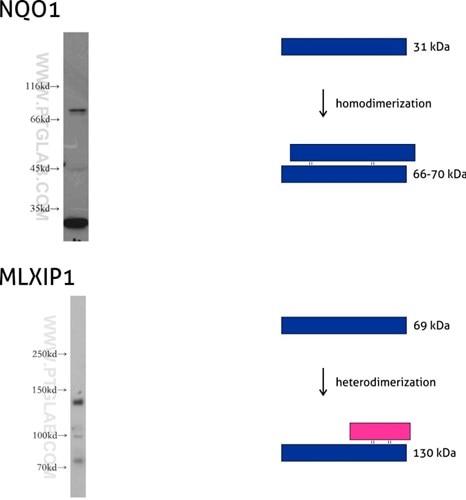 Figure 7: NQO1 (11451-1-AP) is an enzyme that serves as a quinone reductase together with conjugation reactions of the hydroquinones involved in detoxification pathways as well as in biosynthetic processes such as the vitamin K-dependent gamma-carboxylation of glutamate residues in prothrombin synthesis. NQO1 has three isoforms of 26, 27, and 31 kDa MW, and the formation of homodimers (66-70 kDa) is needed for its enzymatic activity.

Mlx-interacting protein (MLXIP, also known as MONDOA) (13614-1-AP) acts as a transcription factor by forming a heterodimer with MLX protein. This complex binds to and activates transcription from CACGTG E boxes, playing a role in the transcriptional activation of the glycolytic target and glucose-responsive gene regulation. MLXIP has three isoforms: 110, 57, and 69 kDa, and the molecular weight of the MLXIP-MLX heterodimer is 130 kDa.

Many proteins encoded by a single gene exist in more than one sequence variant – called protein isoforms. They arise from alternative splicing during mRNA maturation. Selected exons and introns can be included/excluded from the final mRNA product. Included additional protein-coding sequences can reflect in higher MW protein products. On the other hand, the addition of sequences can introduce alternative (premature) stop codons, leading to proteins of lower molecular weights. Some proteins have multiple translation start sites, which gives rise to isoforms with different N-termini. Protein isoforms can have a different half-life and subcellular localization. They can interact with different subsets of proteins, form distinctive protein complexes as well as have different, even opposite, functions.

Figure 8: GLS, also known as GLS1 and KIAA0838, belongs to the glutaminase family. Three isoforms of GLS, named KGA, GAM, and GAC, vary in their MW and tissue expression patterns (PMID: 11015561). KGA, kidney-type glutaminase, has an MW of 65 kDa. GAC, glutaminase C, is 58 kDa, being a product of gene splicing that results in loss of the C-terminal domain that is present in KGA. GAM is the shortest isoform with no catalytic activity and comes into being from the inclusion of intron 2 and premature stop codon. (12855-1-AP detects KGA and GAC isoforms, 20170-1-AP is specific to KGA, 23549-1-AP is specific to all three (KGA, GAM, GAC) isoforms of GLS, and 19958-1-AP is specific to GAC.)

PARD3 (also known as ASIP, Par3, or Bazooka) is one of the PARD family proteins involved in asymmetric cell division and polarized growth. PARD3 has multiple splice isoforms with three main ones: 100 kDa, 150 kDa, and 180 kDa. (11085-1-AP recognizes all three main isoforms of PARD3.)

It is possible for the selected antibody to recognize not only its target protein but also cross-react nonspecifically with other proteins in the analyzed sample. To avoid this issue we might set up an appropriate controls panel and protocol optimization.

-          a lysate from a cell line overexpressing the target protein.

-          lysates from cell lines with lower expression of the target protein

Proteins can undergo unspecific proteolytic digestion if the protein sample is not correctly handled. Proteases released during cell lysis or tissue extraction can cause protein fragmentation, resulting in fragments of lower molecular weights. Some proteins are more susceptible to degradation than others. The choice of cell/tissue lysis buffers and lysis conditions, along with supplementation with protease inhibitors, are vital elements for efficient protein extraction.