The proteins and peptides that regularly serve as endogenous or internal controls may not always take center stage in your research, but they are indispensable to your conducting meaningful experiments and are essential for publication.

Western blotting requires such controls: it is widely used for the semi-quantification of protein levels under of a set of different experimental parameters. Protein standards are required to make sense of Western blotting results, and check  that any increases and decreases in target proteins are actually due to experimental manipulations and not, for example, because the sample went wandering during gel loading. Internal control proteins — i.e. those with constant, unchanging levels —  are usually detected in a second round of blotting, following primary detection of your protein of interest. This step is used to standardize results and normalize for any errors that creep into a Western blot experiment, such as sample loss through loading at  SDS-PAGE or Western blot transfer.

The loading control candidates for Western blotting are usually proteins with high and constitutive expression. As mentioned above, the most basic criterion for a loading control is that its level remains unchanged throughout an experiment, regardless of tissues or cell types used and how they are handled. This means control candidates require careful selection; even bastions of the loading control repertoire — such as β-actin and α-tubulin — can be affected by the conditions of your experiment (so be sure to double check your chosen manipulations do not impact them.)

Here we’ve provided background information on each of the internal control proteins targeted by control antibodies we offer, helping you choose the best control for your personal needs…

View our summary table below to  help select a loading control for your sample type with a different molecular weight to your protein of interest.

The six isoforms of actin constitute a family of highly conserved globular proteins comprised of three main isoform groups, alpha, beta, and gamma. The alpha actins — alpha C1 and alpha 1 and 2 — are a major constituent of the contractile apparatus in muscle tissues. The beta (β) and gamma 1 and 2  (γ1 and γ2) actins co-exist in most cell types and are an integral part of the cytoskeleton; they are mediators of cell trafficking, structural integrity and cell motility. Together, actins are the most abundant proteins in the typical eukaryotic cell, accounting for about 15 percent of total protein in some cell types. As such, actin is widely used as an internal control in Western blotting experiments. 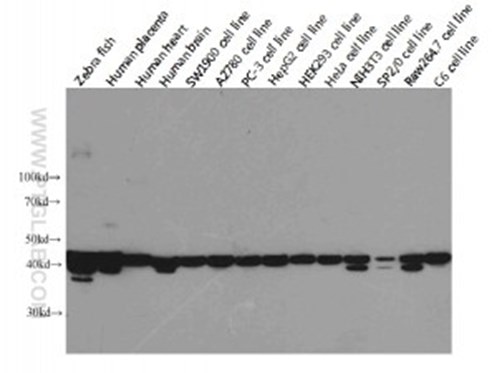 Proteintech’s  polyclonal ACTB antibody  (20536-1-AP) was generated using a β-actin protein antigen (amino acids 14–167) and recognizes all forms of actin, making it a pan-actin antibody. Many studies use β-actin antibodies recognizing all actin isoforms to probe for this loading control collective. However, if your studies involve work with skeletal muscle samples, or you are working with conditions that see changes in cell growth or altered interactions with the extracellular matrix, another loading control may be better suited to your needs. 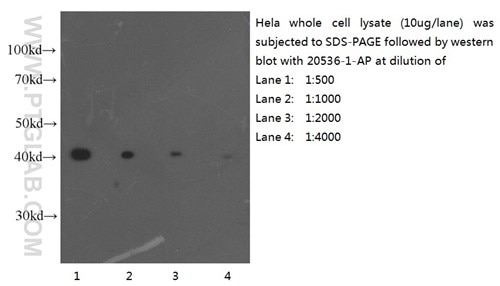 COX-4, or COXIV (cytochrome c oxidase subunit IV), is a nuclear-encoded subunit of the human mitochondrial respiratory chain enzyme cytochrome c oxidase (COX). The COX-4 subunit can be expressed as either of two isoforms, isoform 1 and 2 named COX4I1 and COX4I2 respectively. COX4I1 expression is ubiquitous throughout all tissues, whilst COX4I2 is lung-specific. Because of its dependably high level, COX4I1 is commonly detected as an effective loading control for mitochondrial proteins. However, some caution is advised when selecting this protein for Western blot detection as many other proteins run at its 17kDa size during SDS-PAGE (make sure your band of interest won’t be obscured). It is also advisory to double check that any experimental manipulations do not affect its levels. For an alternative mitochondrial protein loading control see our entry on VDAC1 below.

Glyceraldehyde 3-phosphate dehydrogenase, commonly known as GAPDH, catalyzes the sixth step of glycolysis. It also participates in nuclear events such as transcription, RNA binding and transport, DNA replication and repair, as well as apoptosis. Its expression is high and constant in most tissues and cell types, earning the gene and its protein housekeeping status. Because of this, GAPDH is commonly used as a protein loading control in Western blotting and internal control for RT-PCR. However, the amount of GAPDH expression can differ between some tissues and its suitability for your experiment should be taken into consideration before selecting this target as a control. It is also worth noting that some physiological factors, such as hypoxia and diabetes, increase GAPDH expression in certain cell and tissue types.

Lamins are integral components of the nuclear lamina, a dense, fibrous layer underlying the nuclear envelope on its nucleoplasmic side. Lamins play an important role in the structural integrity of the nucleus and its traffic control, as well as interacting with chromatin and gene expression. Vertebrate lamins consist of two types, A and B. The LMNB1 gene encodes one of the two B type proteins, lamin B1 and can be used as a loading control for those working with nuclear fractions; however, this protein is not suitable for samples where the nuclear envelope has been removed. It is also worthwhile to note that lamins become phosphorylated during mitosis when the lamina matrix is reversibly disassembled. Proteintech’s  LMNB1 antibody  (12987-1-AP) has been raised against a protein antigen (amino acids 236 to 586 at the C-terminus) and is validated for use in Western blot, IHC, ELISA and immunofluorescence.

Levels of PCNA do not vary with cell cycle status in mammalian cells, but, as it is more abundant in proliferating cells, PCNA is mostly used as loading control in cell populations undergoing proliferation. PCNA is best avoided if your experiments induce DNA damage as this protein is quickly degraded when DNA damage pathways are activated. 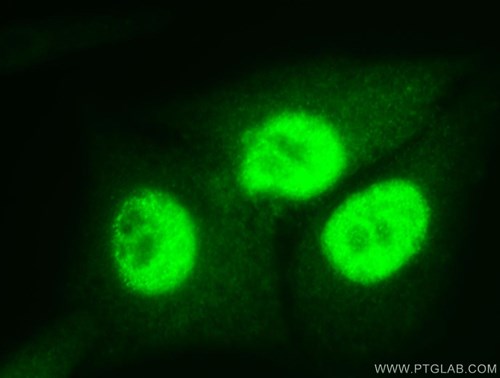 Tubulins are the major components of microtubules, the major transport network in cells.  The microtubules are involved in a wide variety of cellular activities ranging from mitosis and transport events to cell movement and the maintenance of cell shape. Highly and stably expressed and conserved across the species, tubulins make excellent whole cell or cytoplasmic fraction loading controls in Western blotting. However, tubulin expression may vary according to resistance to antimicrobial and antimitotic drugs.